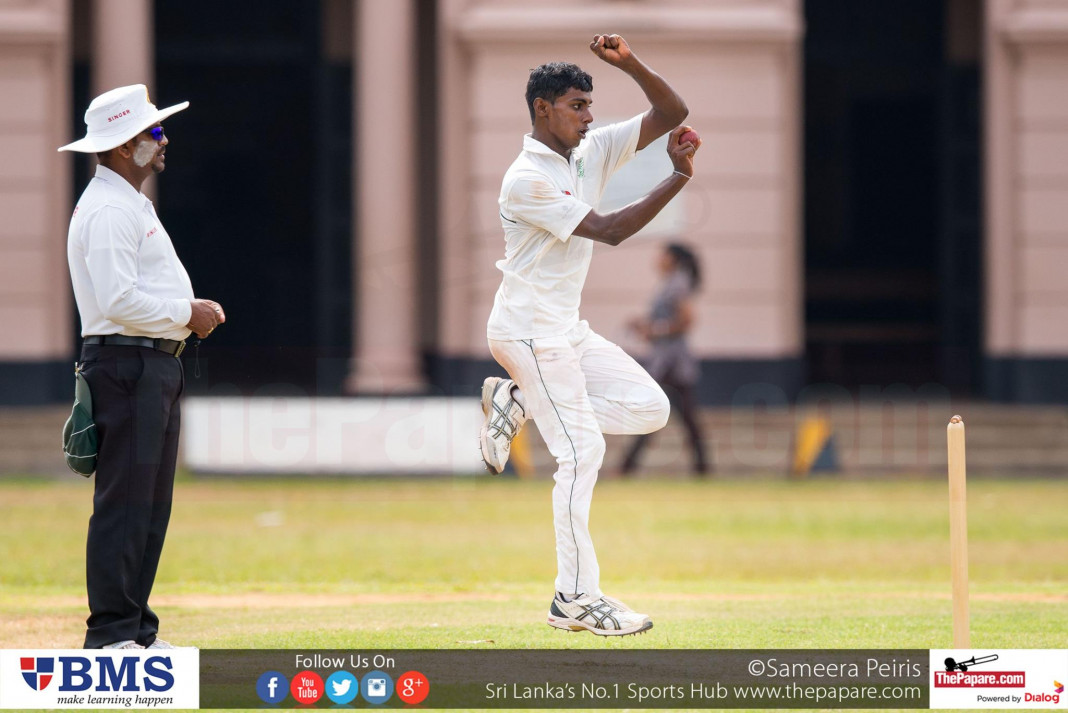 Royal College continues their journey for a win as they hosted St. Benedict’s at Reid Avenue which ended in a first innings win for Royal, St. Servatius down Bandaranayake College with an outright win while St. Sebastian’s, St. Mary’s, D.S. Senanayake and St. Sylvester’s all settled for midweek draws.

Earlier, on day one, wicketkeeper Kavindu Madarasinghe scored a sublime century to steer the Royalists to 290/8 in their first innings. Youngster Thevindu Senaratne played the second fiddle with a half-ton. On the following day, they reached the 300 milestone before declaration. The Benedictines were in trouble early on when Abhishek Perera’s three scalps left them in a spot of bother on 33/4. At lunch, they remained on 84/6 with Mahisha Theekshana bracing the inning from an unbeaten 39. After lunch, despite wickets falling, Theekshana continued his quest, reaching 77. Bens were eventually bowled out for 159 while Abhishek Perera secured a five wicket haul.

Not enforcing a follow on, Royal commenced the second essay and at close, they remained at 198/6. Thevindu Senarathne scored 70 while Himesh Ramanayake chipped in with an unbeaten half ton. For the visitors, Dulantha Lewis 3 for 60.

Batting first, St. Mary’s made 269 runs as Ashan Senadeera top scored with 75. Preshan Fernando took 3 for 43. In response, the home side was bowled out for 203 in 63 overs. Vinuja Ranasinghe scored 36 while Lasitha Udage took 6 for 72.

In the second essay, St. Mary’s was bundled out for a paltry 97 where Vinuja Ranasinghe, this time dazzled with the ball, recording a stunning 7 for 32. At close, St. Sebastian’s remained at 34/0.

St. Servatius College dominated at Matara with an outright win over Bandaranayake College Gampaha in their Group D game.

Kesara Nuwantha’s 65 marshaled the home side to 207 before they bowled out the visitors for 105. Shashika Dulshan captured 5 for 24 while Thilan Prashan took 4 for 36 for St. Servatius.

Forced with a follow on, Bandaranayake College was bowled out for 158 in 50 overs. Hachitha Thimal grappled with 53 while Supun Kavinda took 6 for 31. Chasing a target of 57, St. Servatius reached it losing just one wicket. Isuru Udayanga was unbeaten on 36.

D.S.Senanayake College earned first innings honours against St. Sylvester’s College Kandy in their midweek Group C fixture. Batting first, D.S made 272/9 as they declared after 79 overs. Dasun Dimasha made 51 while Thusith de Soyza took 3 for 64.  The visitors were subdued at 194 Manjith Rajapaksha top scored with an unbeaten 85. In their second essay, D.S Senanayake remained 128/7 at close.