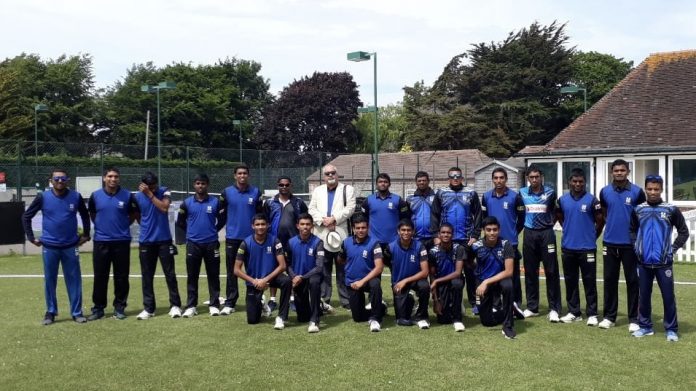 After a successful schools cricket season, the S. Thomas’ College U19 team is on a tour to the United Kingdom since the 31st of May.

The Thomians won their first game of the tour comfortably by 6 wickets against the Sussex U19 Minor County XI. The game was held at the Middleton Cricket Club grounds. Batting first, the hosts managed only 110 runs in 30.1 overs. In contrary to the expectations in England, it was the spinners who led the bowling for the Thomians. Left-arm spinner Shannon Fernando and leggie Dilmin Rathnayake picked up 4 wickets each for the School by the Sea.

It was short work for the boys from Mt. Lavinia while batting as they concluded the game in just 15 overs. Opener Shalin de Mel posted 39 runs to top the batting charts while Yohan Perera stacked up an unbeaten 29 to see his school past the line.

The young Thomians are to play 6 more games during their stay in the UK and will be visiting several tourist spots around the country including the Lords Cricket grounds and the Manchester Stadium. The boys will also be hosted by their seniors in the UK.

Thomas’ College had a splendid season this year finishing as the runners-up of the two-day tournament and as champions of the limited overs tourney. They also claimed a win in the coveted Battle of the Blues encounter against arch rivals Royal College.