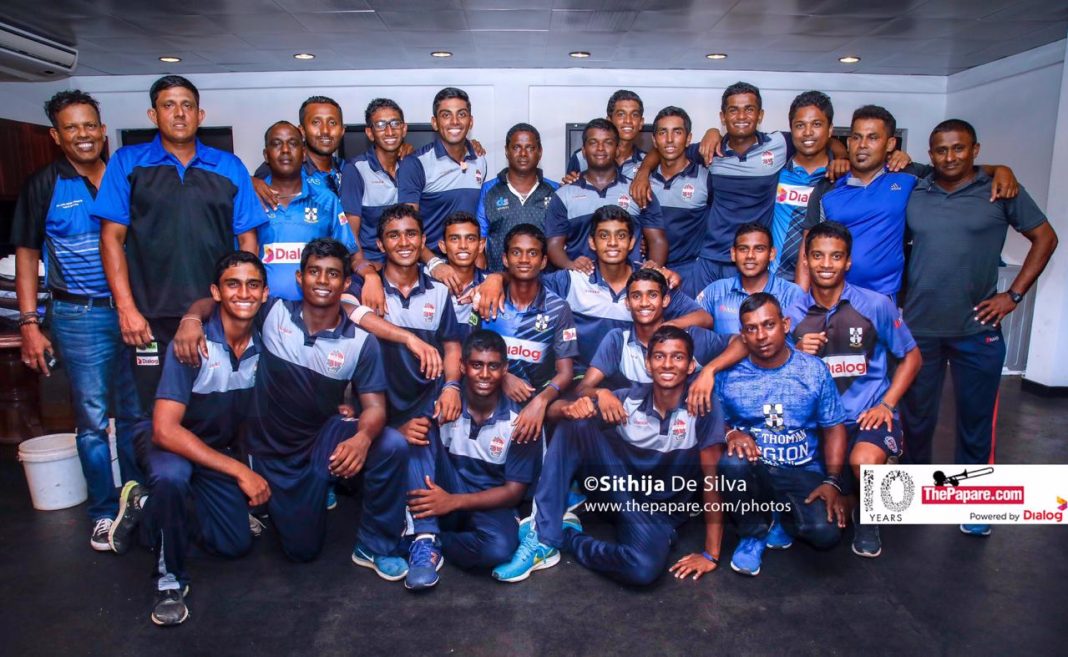 S. Thomas’ College, Mount Lavinia dethroned the defending champions, Richmond College by 11 runs in a thrilling final at the Galle International Cricket Stadium to win the Singer U19 Division I Limited Overs Cricket Tournament 2018/19 on Tuesday.

Captain of the title-holding Richmond outfit and Sri Lanka U19 cap, Thaveesha Abishek opted to chase on a greenish Galle wicket after winning the toss. The decision paid off straight away as speedster Amshi De Silva dismissed Thomian opener Shalin De Mel in the very first over.

Thomian skipper Sithara Hapihinna too was sent back by Amshi when he was caught behind by wicket-keeper Vimud Sapnaka in the 5th over for 15 runs. Pairing up when the Thomians were struggling on 22/2, young Ryan Fernando and Yohan Perera put up an excellent 96-run stand for the 3rd wicket.

Ryan was the first to depart as he was beaten off a sharp turner from left-arm spinner Dilum Sudeera to nick behind to the wicket-keeper. Following Ryan’s dismissal for 44 runs, in-form Umayanga Suwaris perished for 10 runs as he ended up hitting one back to offie Dimuth Sandaruwan, trying to clear the in-field.

Coming back into the team after missing out the Semi-Final due to an injury, double-centurion of the two-day Semi-Final Ravindu De Silva (21) became Dimuth’s second victim after putting on a 54-run stand for the 5th wicket together with Yohan Perera.

Yohan Perera on the other end played a brilliant knock as he completed a very well-constructed century. Coming to the middle in the 5th over when his team was on 22/2, Yohan took the Thomian score to 222 by the 44th over before he was bowled by leg-spinner Chamath Dilsara.

Helped by contributions from the tail-enders, the boys from Mt. Lavinia crawled on to 261 by the end of their innings. They lost their last wicket in the 2nd ball of the last over. Interestingly the 3rd highest score of the Thomian innings was the 31 extra runs given away by the Galle boys, which included 27 wides.

In bowling for Richmond, opening bowler Amshi De Silva and leggie Chamath Dilsara took 3 wickets each while Dimuth Sandaruwan picked up 2 wickets. Dilum Sudeera was impressive, giving away just 23 runs in his 10 overs although he picked up just a single wicket.

With an intimidating target of 262 runs in 50 overs, the Richmondite openers Vinuja Kiriella and Vice-captain Adithya Siriwardena provided a decent start, putting on 34 runs in the first powerplay. The decent start was spoiled by the Thomian hero with the bat, Yohan Perera as he dismissed Kiriella off the last ball of the 10th over for 15 runs.

Skipper Thaveesha Abishek did not survive too long as he skied one up in the air for just 7 runs off a Thevin Eriyagama delivery. Young Bhanuka Manohara joined his vice-captain then when Richmond was in quite a bit of trouble on 52/2.

The duo complimenting each other pretty well added 70 runs for the 3rd wicket taking full advantage of the right-hand left-hand combination. The beautifully built stand suddenly came to an end due to a run-out which happened because the two batsmen went for a second run which was not on offer. Siriwardena was the victim for 53 runs.

Sandun Mendis coming in at number 5 accelerated the Richmond scoring rate as he played some delightful shots as soon as he arrived. The quick-fire stand between Bhanuka and Sandun was worth of 41 runs and came in just 4.1 overs. The stand was broken as Bhanuka played a rash stroke to throw his wicket away off a Shannon Fernando delivery for 51 runs.

Sandun kept on fighting for his team along with three quick partnerships of 18, 28 and 13 respectively with Dilum Sudeera (6), Vimud Sapnaka (12) and Dimuth Sandaruwan. Sandun was unfortunately dismissed on 49 by Kalana Perera in the 44th over when Richmond was on 222.

Keeping the Galle hopes alive further Dimuth kept battling. But he too was run out courtesy Shalin De Mel’s brilliance in the field for 13 runs. After taking the match to the last over, the final pair of batsmen couldn’t score the required 12 runs. Eriyagama bowling the final over dismissed Kavindu Nirmana off the very first ball of the over, handing S. Thomas’ an 11-run win and the U19 Division I Limited Over title.

Shannon Fernando was the pick of the bowlers for the Thomians with 3 wickets for 44 runs while Kalana Perera and Thevin Eriyagama picked up 2 wickets each.

Richmond has won the last two limited-overs finals eventually were dethroned as S. Thomas’ won back the title which they last won in 2002 under Dilshan Gunawardena. They will now face St. Joseph’s College in the all-important two-day final on the 11th and 12th of this month at Royal grounds in Reid Avenue.