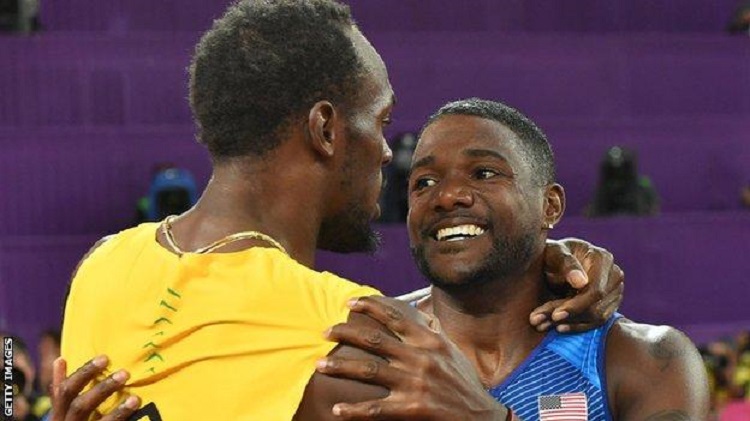 Justin Gatlin tore up Usain Bolt’s farewell script as he stole world 100m gold with the run of his long and controversial career.

Bolt was left with only a bronze in his final individual 100m race as 21-year-old Christian Coleman made it a USA one-two.

The 35-year-old Gatlin, twice banned for doping, came through almost unnoticed in lane seven in 9.92 seconds, with Coleman’s 9.94 holding off the greatest sprinter of all time.

Despite struggling for fitness and form in his valedictory season, Bolt had still been favourite to secure his 20th global gold.

It was supposed to be Gatlin’s year in 2015, when the American went to the World Championships in Beijing on the back of a 28-race unbeaten run.

Bolt produced his great miracle to beat him that night in the Bird’s Nest, but in the stadium where he won 100m Olympic gold in 2012, he could not provide the perfect ending to a perfect career. 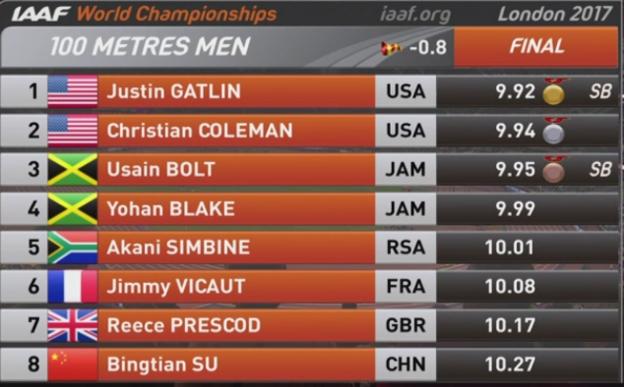 Gatlin, Olympic 100m champion in 2004 and double world champion in 2005, had been booed every time he went to his blocks in these championships, his doping past making him the cartoon villain of a troubled sport.

After his second positive test, for testosterone in 2006, he avoided a life ban after cooperating with the authorities, accepting an eight-year suspension that was then reduced to four on appeal.

That left him free to return to the track, and he was to have his revenge in spectacular style, standing tall and putting a furious finger to his lips as his win stunned the capacity crowd to initial silence.

The stadium took a little revenge of their own, chanting, “Usain Bolt! Usain Bolt!” as the result began to sink in.

But this was a deserved victory in its execution if not its formation, a last hurrah for a man that many in the sport wished no longer had the chance to compete

Bolt left chasing – for once 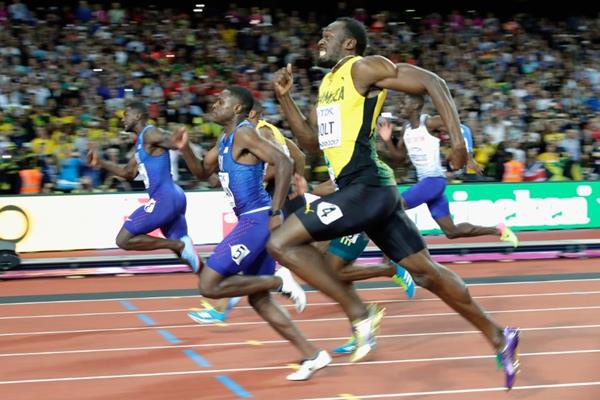 Bolt had another poor start, with his reaction time of 0.183 seconds the slowest in the field and 0.05 down on Gatlin.

With Coleman out fastest, he was always chasing, yet while we have grown used to seeing him first close down the more explosive starters and then pull away from them, this time the old magic was not there when he called upon it.

Bolt, 30, had never previously lost a World Championships 100m final he had started, with the one blemish on his record being his false start in Daegu in 2011.

But with the tyro Coleman holding him off, Gatlin powered through in the last 15 metres, maintaining his form through the line as the great champion was for once left powerless.

Britain’s 21-year-old Reece Prescod was seventh in his first major final, but this will be a night remembered as much for the man who failed to win as the one who did.

‘I tuned out the boos’

World champion Justin Gatlin: “I tuned it out [the booing] through the rounds and stayed the course. I did what I had to do. The people who love me are here cheering for me and cheering at home.

“It is Bolt’s last race. It is an amazing occasion. We are rivals on the track but in the warm-down area, we joke and have a good time. The first thing he did was congratulate me and say that I didn’t deserve the boos. He is an inspiration.”

Bronze medallist Usain Bolt: “I tightened up at the end and that is something you should never do. I didn’t execute when it mattered.

“I am not fully comfortable in those blocks but you have to work with what you have. I can’t complain about that.

“He [Gatlin] is a great competitor. You have to be at your best against him. I really appreciate competing against him and he is a good person.”

Olympic champion and world record holder Almaz Ayana put a problematic season behind her to storm to 10,000m gold.

Ayana, who set that staggering record a year ago in Rio, threw in a decisive injection of pace at halfway to finish 45 seconds clear of her Ethiopian compatriot Tirunesh Dibaba in 30 minutes 16.33 seconds, with Kenya’s Agnes Tirop taking bronze.

Luvo Manyonga completed a fairytale triumph in the long jump as his second-round leap of 8.48m took gold from the USA’s Jarrion Lawson by four centimetres, as the winner’s fellow South African Ruswahl Samaai was third.

Manyonga, a former crystal meth addict, celebrated in style after going one better than his silver in Rio.

Lithuania’s Andrius Gudzius, with a final round of 67.89m, took discus gold from Sweden’s Daniel Stahl and the USA’s Mason Finley.

Britain’s Laura Muir qualified impressively for Sunday’s 1500m final as she was second in her semi-final.

Muir will be joined by compatriot Laura Weightman, who came storming through down the home straight.