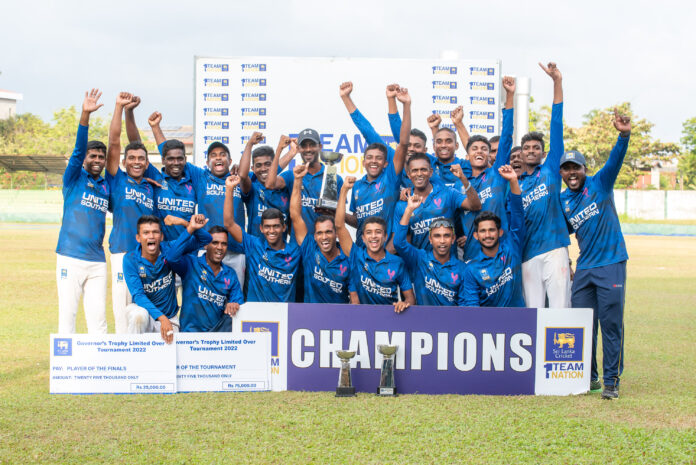 United Southern Sports Club emerged champions of the Governor’s Trophy One Day Tournament as they defeated Leos Cricket Club by 5 wickets in the final of the tournament played today (28th September) at De Zoysa Stadium in Moratuwa.

Leo Cricket Club’s skipper Gihan de Soyza won the toss and had no hesitation to bat first. However, they couldn’t get off to a good start as the opening pair Nethmal Saheera and Ralf Fernando were back in the hut within the first 3 overs of the innings.

Primash Obris and Hansaja Viswajith steadied the innings putting on a crucial 50-run stand for the 3rd wicket. But after their dismissals, Leos Cricket Club lost their way being restricted to just 169 runs. After being, 2 for 68, they lost 8 wickets for just 101 runs suffering a major batting collapse at the middle.

Rusiru Rajapaksha and Woshitha Amarasinghe opened the innings for United Southern Sports Club in the reply, but their stand didn’t last long as the former lost his wicket early in the innings for just 4 runs.

However, Amarasinghe and No. 3 batter Pathum Mendis steadied the ship building a match-winning partnership of 91 runs off 120 balls for the 2nd wicket. United Southern Sports Club got over the line in the 42nd over with 5 wickets in hand.