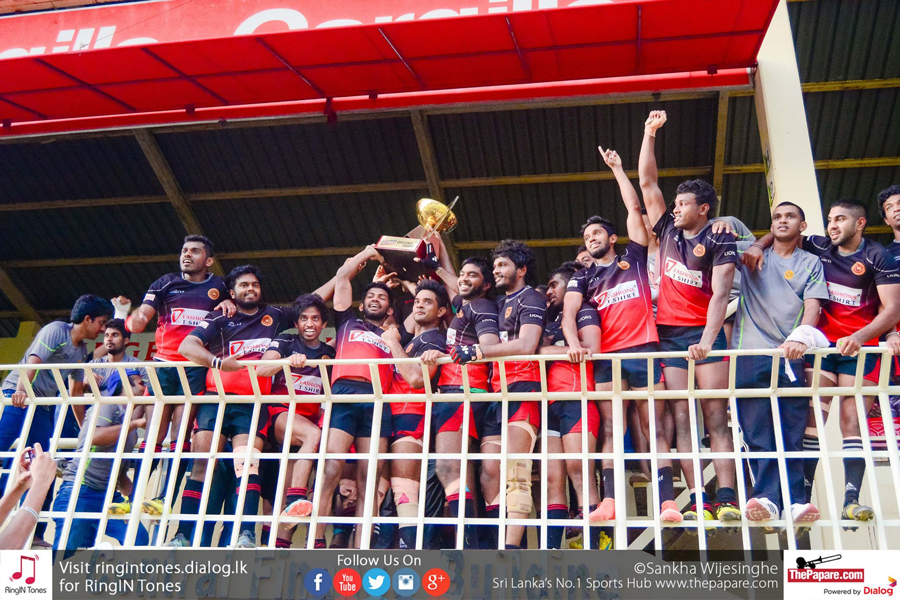 Pera kicked off proceedings amidst a reasonable crowd present at the Nittawela stadium. Straight off the start the Moratuwa number 14 and winger H. Liyanage went on to score after the number 8 had broken through the defense and handed him the ball for a sprint to the line. P.Madhusanka added the extras with ease from the left flank.

Yet again from the restart Moratuwa scored on the other side of the field and this again was another number 8 break through the defense. This time it was the second center S.Hewaswasam who went over. Madusanka added the extras. Just 5 minutes into the game and  Moratuwa were already leading 14 points to nil.

The Peradeniya comeback began ever so slowly but with the momentum they scored three back to back tries. The first try came in the far corner of the field where the second row Isuru Herath went in. The second try was courtesy of the forwards who put in the hard yards as they ground their way over the line with advantage being played by the referee. The try scorer this time was the captain A. Kasthuriarachchi himself. Isuru Herath could only convert one of these tries.

The last try of the first half was scored by the Pera playmaker and fly half B. Ekanayake as he broke the line inside the 22m and went in for his first try of the game. He played a vital role in the victory for Pera, scoring a hatrick of tries. Isuru Herath failed yet again to as the referee blew for half time.

The second half began just like the first where Moratuwa made the early inroads into the Pera half and went away with two quick scores to give them the lead yet again at 24-17.

The fly half B.Weerakoon for Moratuwa made a lovely show and go just before he hit the gap and no one could chase him down before he touched down over the line. N. Arachchi broke away from the back of the scrum to touchdown in the far corner; the kicker didn’t convert either try.

The Pera lads made a come-back once again as B. Ekanayake was everywhere, making the all-important kicks as well as the vital line breaks to put the Mora defense on the back foot. He scored his first try of the second half under the posts as he cut in to the two defenders before diving in over the line. The second try in the second half came in the far left corner of the field as he executed a good running line evading the defense before touching down. For Peradeniya S.Adhikara and Rajeev Karanayake had a good game as they made some crucial tackles and were secure under the high ball. The captain Kasthuriarachchi was lethal, breaking from behind the scrum and S.Weerakoon, the second center, was their player of the tournament scoring in every match except the final. Pera squandered two good opportunities to seal the game off but at the end of the day they emerged victors by 29 points to 24 beating the defending champions.