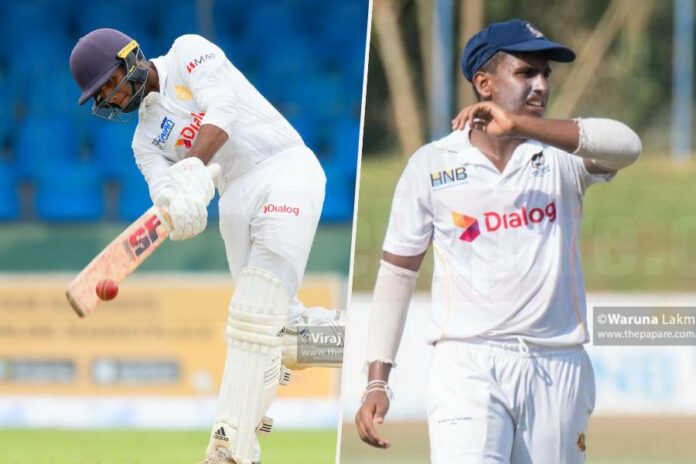 Four games of the Schools U19 Division Limited Overs Cricket Tournament came to a close yesterday (24th September) with a couple of terrific schoolboy batters staging centuries of class.

Vishen Halabage of St. Peter’s College smacked a cracking ton against Ananda College to catapult the Peterites to a mammoth total of 336 runs for the loss of 3 wickets at the end of their 50 overs.

Halabage made a thumping 141 runs in a hurry with 7 sixes and 15 fours before finding himself venturing out of his crease when the gloveman disturbed the stumps. As Halabage opened the innings, his knock completely wiped the Anandians out of the game as they never really looked like they had any chance whatsoever.

One cannot forget Halabage’s opening partner, Oween Salgado, who also made a vital 80. Salgado spent 113 deliveries at the crease, rotating the strike which facilitated the special knock from his partner.

Skipper Nimuthu Gunawardena and senior batter, Sanshay Gunathilaka, both got half-centuries putting the Anandians deep into their misery.

Halabage kicked into the game once again in the second innings with the ball in hand as he bagged 3 wickets to his name to finish with the best figures in the match.

Ananda College was shot out for 146 runs handing a massive win for the Peterites.

With that win, St. Peter’s College will now push St. Servatius’ College for the top position in group ‘A’ of the Tier ‘B’ tournament. Both teams have played 4 games and won all of it with the Matara school having the upper hand in Net Run Rate.

Sharing the spotlight with Halabage is the Royalist who is having a terrific season with the bat so far as he decorated it with a well-deserved hundred. Uvindu Weerasekara is now the second in the top run-getters chart in Tier ‘A’.

Royal played Mahanama College yesterday and had 227 runs to chase down. Batting at No.4 Weerasekara made sure that his team had no pressure on them as he took the baton and did not stop until he passed the winning line.

The stylish right-hander made an unbeaten 108 off 122 deliveries with 4 sixes and 7 fours. The Royalists got to the mark with 7 wickets to spare.

Miqdhadh Akram of Zahira College recorded the best bowling figures of the day picking up 4 wickets for 37 runs in his full quota of overs against St. Anthony’s College, Wattala.