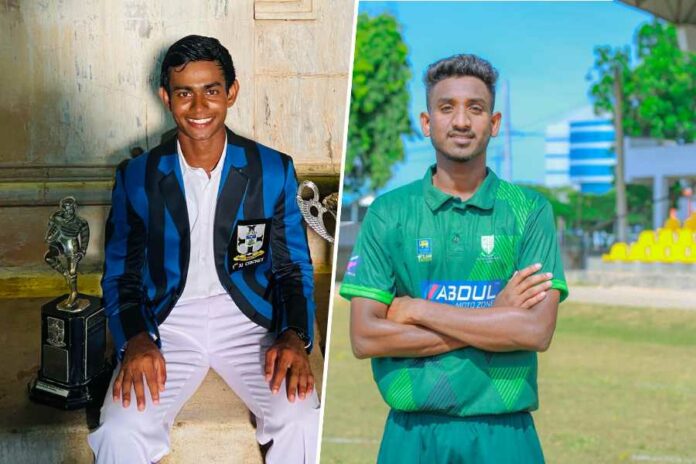 Four games of the ongoing Schools U19 Division 1 Cricket Tournament came to a close today (23).

St. Servatius’ College, who is having a merry run so far in the Tier ‘B’ Tournament, recorded their 4th consecutive win, showcasing the stronghold within group ‘A’.

The Servatius’ College Skipper Chirath Neththaru, who was having a lousy tournament so far with just 23 runs in 3 games including 2 ducks in the first two games, finally found form with a match-winning knock of 77 runs against St. Sylvester’s College. His innings came at a fine pace as he saw off 89 deliveries, hitting 5 four and 2 sixes.

Neththaru was well supported by the batter in-form for St. Sevatius’, Kushan Wijerama, who made a vital 41 off 49 deliveries, while Mithila Minsara also chipped in 40 runs for St. Servatius’ cause.

This meant the team had a luxurious 296 runs on the board to defend and they proved that to be plenty. St. Sylvester’s were undone for 117 runs, handing the Matara school a 179-run victory.

Mahith Perera too put up a decent bit for himself today to grab the headlines. Having had a decent tournament so far, Perera is now the fifth highest run-scorer of the tournament in Tier ‘A’. He notched up another 64 runs to his name while steering his school to a comfortable 164-run victory against D. S. Senanyake College.

Young Rajindu Tillakaratne was also instrumental in this win for the Thomians as the right-arm leg spinner bagged 4 scalps for 29 runs in 9 overs.

Alongside Tillakaratne, Charuka Peiris also impressed with 3 wickets to his name as D. S. Senanayake College were wrapped for 80 runs.

In another game between Maliyadeva College and Richmond College at the Galle International Stadium, Ushan Bimsara of Maliyadeva College struck 72 runs with 4 fours and 3 sixes, but lacked the support of his team as the rest of them only managed 89 runs altogether, including the extras.

The Sri Lanka youth star Malsha Tharupathi had a great outing in this game as the right-arm leg spinner picked a fifer with the ball and came out with the bat to write an unbeaten 47 runs to his name. Richmond won the game with 5 wickets to spare.