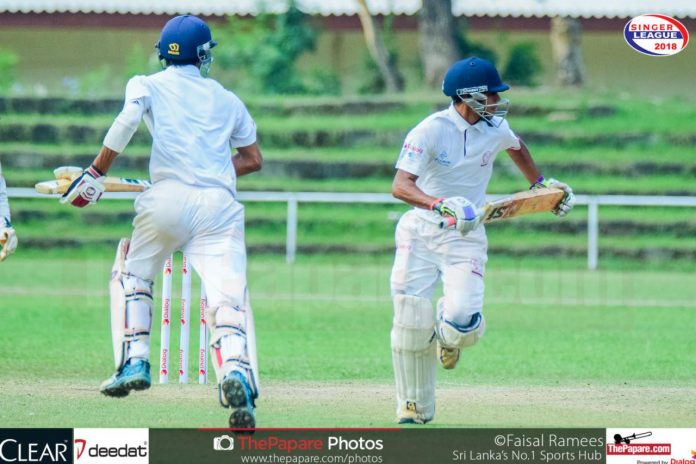 Akila Mendis (4/07) and Kavindu Nadeeshan (3/38) starred with the ball as Dharmasoka College took upper hand on day one of the 52nd Battle of Blues against Sri Devananda College, while St. Thomas’ College, Matara registered a 5-wicket victory over St. Servatius College in the 19th Ruhunu Battle of Blues one day encounter.

The 52nd Battle of Blues between Dharmasoka College and Sri Devananda College commenced today at the De Zoysa Stadium in Moratuwa. After being put into bat first, Dharmasoka College posted 201 runs with Shanula Shamin top scoring with 75 runs.

Shamindu Anushka was the star with the ball for Sri Devananda College as he picked up 5 wickets for 52 runs. In reply, Sri Devananda batsmen put on a poor batting display as they were bowled out for just 106 runs in 35.3 overs.

St. Thomas’ College managed to register a 5-wicket win over St. Servatius College in their 19th Ruhunu Battle of Blues One Day Encounter worked off today at the Uyanwattha Stadium. After restricting Servatius to 231 runs, the Thomians chased down the target in just 44.3 overs with 5 wickets in hand. Suranga Lakshan (45) and Hirusha Jiwajith (44) top scored with the bat.

Ashoka Vidyalaya defeated President’s College by 5 wickets in the 13th Rattharan Satana annual One Day encounter which was worked off today at the R. Premadasa Stadium in Colombo. Vihanga Shamilka and Rahul Chandrasekara starred with the ball for Ashoka Vidyalaya, taking 9 scalps between them.

Sri Rahula College defeated Sri Sumangala College by 7 wickets in the Kandy Battle of the Golds annual One Day encounter which was worked off today at Pallekelle. Dilshan Arabegedara was the star performer of the match as he picked up 5 wickets for just 7 runs for Sri Rahula College to restrict the opposition to a low score.

The 29th Battle of Golds between St. Mary’s College and Kegalu Vidyalaya ended in a draw today at the Public Grounds in Kegalle. St. Mary’s College took honors in the drawn encounter as Gajitha Kotuwegoda starred with the bat scoring a magnificent century.