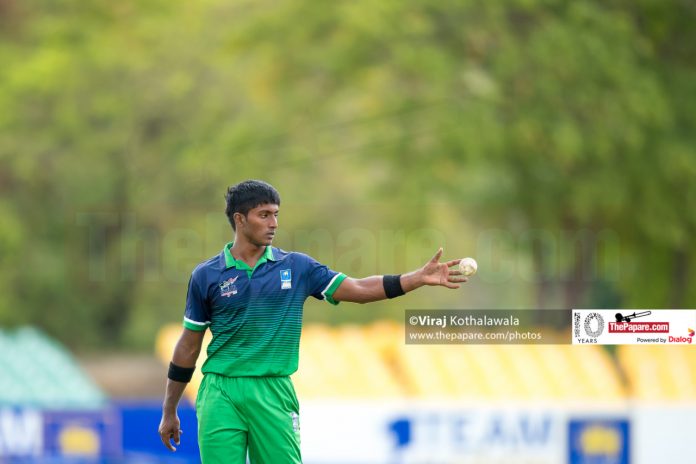 Maris Stella College, Negombo ignited the season with an outright win against St. Anne’s College, Kurunegala. Two other games of the Singer U19 division 1 tournament 2019/20 concluded today, 4th October, while several others hit the roads across the Island.

After being asked to bat first by the visiting skipper, Lasith Warnakulasooriya, the Maris Stella boys staged a modest 176 runs for the first-innings on day-one. The game was played at St. Sebastian’s College grounds in Katuneriya.

Starting day-two at 94 for 2, with two batsmen, Kavindu Ranasinghe on 42 and Thrimalsha Silva 30 at the crease. That’s when the opposition skipper Naveen Fernando decided to enter the party. Fernando stormed through the Annite line-up, tearing them apart as all of them fell within the next 38 runs. St. Anne’s College settled to a disappointing 132 runs as Kavindu Ranasinghe ended his run at 59 while Thrimalsha was first to go in the day without scoring any further.

Maris Stella skipper led by example having played an outstanding game. He followed up his fifty in the first innings with magnificent figures of 6 for 24 with the ball.

Maris Stella College added another quick 118 runs in just 16.3 overs. It was yet again the spin duo of St. Anne’s College, Manaan Musammil and Pasindu Tennakoon, who were among the wickets. Tennakoon bagged 4 wickets for 34 runs while Musammil picked up 3 for 47 runs. Both of them wrapped match bags of 8 wickets each.

Right-arm off-spinner Priyashan Silva starred in the second-innings with the ball for Maris Stella as he picked 6 wickets for 18 runs. Another 2 more wickets for Naveen Fernando and things were done and dusted. Annites were undone for just 98 runs giving the Negombo school their first win of the season.

Joes, Zahira end a low-scoring thriller in a draw

Zahira College Colombo crossed over their fence to play neighboring St. Joseph’s College in a……

St. Peter’s College won the toss and opted to bat first at the Lake View grounds in Kandy. The Colombo school scored 226 runs for the first-innings on day-one. Kanishka Maduwantha topped the batting chart with 40 runs while Sahan Siriwardena picked up a fifer.

Dharmaraja College started day-two at 36 for 1 and batted out the entire day to end the game in a draw with no first-innings honours for either teams. Chethiya Ekanayake scored 38 runs while the skipper, Dulaj Bandara added 37 runs for the cause. Right-arm off-spinner Ruvin Seneviratne and Left-arm spinner Kanishka Maduwantha both picked up 2 wickets each.

Dharmaraja College scored 171 runs for the loss of 6 wickets at close of play.

The hosts, Thurstan College fell surprisingly for just 105 runs in the first-innings after being asked to bat first by the visitors. Youth international star Dilum Sudeera bowled exceptionally to pick up 6 wickets for 29 runs. Middle-order batsman Ranesh Silva scored 32 runs to be the highest-scorer.

Thurstanites made a strong comeback into the game by restricting the Richmondites for just 103 runs in their first-innings. Left-arm spinner Punthila Kumara recorded a fifer to lead the Thurstan bowling unit.

The boys from Cinnamon Garden made amends in the second-innings by scoring 221 runs for the loss of 7 wickets and declared the innings. Avishka Kaushalya top-scored with 77 runs while Ranesh Silva added an unbeaten 55. Sudeera wrapped a 10 wicket-haul with another 4 wickets in the second-innings.

The game ended in a draw.