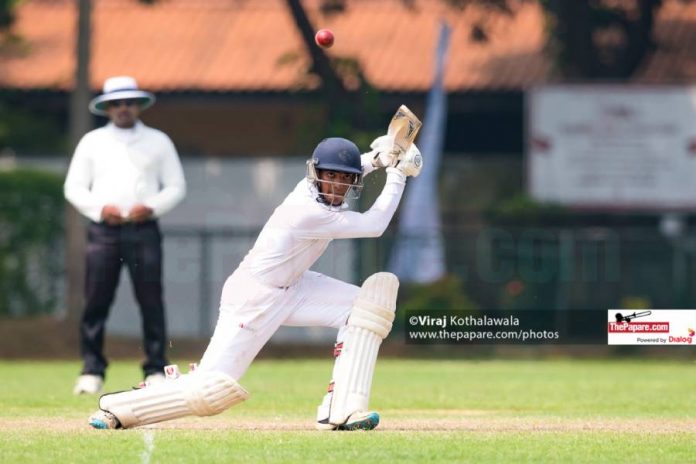 The game was played at the historic Asgiriya Stadium in Kandy. The visitors won the toss and decided to bowl first which, turned out to be a good toss to lose for Trinity. They tottered their way to a decent total of 230 runs for their first-innings. The flag bearer of the team Abishek Anandakumar led the batting yet again with a stellar knock of 92 runs. Thewin Amarasinghe was the next best performer with the bat making 39 runs. The left-arm spinner Kalana Sandeepa was the pick of the bowling for the Sebastianites with figures of 3 for 79 runs.

The power-packed bowling unit of Trinity College came down hard at the visitors who looked at bay with the bat in hand. The spin duo Uvindu Wimaladharma and Abishek Anandakumar took the baton from the pace department, who operated in tight lines consistently to get the wickets column rolling. Wimaladharma topped the table with 4 wickets to his name while his partner-in-crime Anandakumar bagged 3 scalps.

A follow-on which looked pretty unlikely with a first-innings score of 230 was enforced on the Moratuwa school. This time came in a third assassin to hunt down the Sebastianites. Right-arm off-spin of Shane Gunathilake baffled five men from Moratuwa. He registered figures of 5 for 45 while Abishek added another 3 wickets under his belt.

A 32-run target was set for the Trinitians. They duly chased it down with troubles in just 7.1 overs to stamp authority and pride of the brand of cricket they are playing this year. They have won 6 games outright out of the 7 games they played.

Read More : Royal miss out an outright win by a whisker

The visiting Richmond College won the toss and opted to bat first. They scored 164 runs off the first-innings. Kavindu Nirmana was the top-scorer with 38 runs while Shone Shenil picked up 3 wickets for 19 runs to grab the spotlight in the bowling.

If Richmond College was bad, St. Joseph Vaz College was even poor in batting. They managed only 113 runs for their first-innings. Chamath Fernando’s 37 runs were the most by the batsmen. Sugeeth Nimnada who was brilliant with the ball in hand missed out on a fifer by a whisker. He bagged 4 wickets for 26 runs.

The Richmondites came out with a much better performance in the second-innings scoring 180 runs for the loss of 3 wickets before declaring. Kavindu Nirmana completed his half-century that he missed out on the first-innings while the team’s Mr. Reliable, Dimuth Sandaruwan smacked an unbeaten 59.

The purple patch in the batting for St. Joseph Vaz seemed to be on continuing as they were 8 down for 119 after the game.