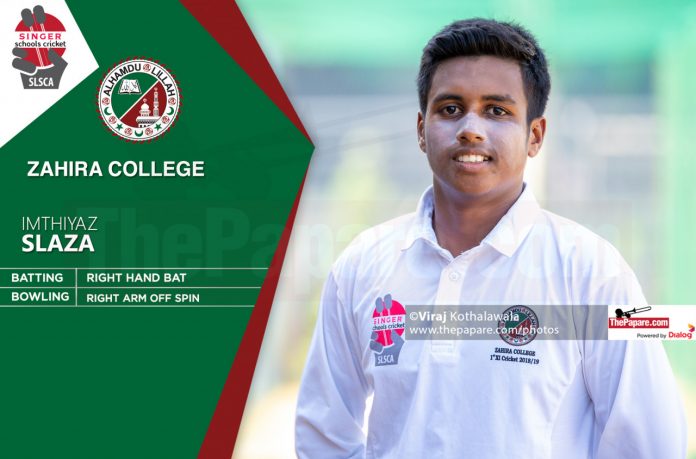 Zahira College travelled to the hills of Kandy to face Dharmaraja College in a traditional encounter while the group ‘D’ fixture of Singer U19 Division 1 Cricket Tournament between Ananda College and Lumbini College hit the roads today, 26th November.

The visitors won the toss and elected to field first after a rain-delayed start. Imtiyaz Slaza who bowled brilliantly to give Zahira a head start bagged 6 wickets for just 32 runs with his right-arm off spin.

Janith Chathuranga scored a brief 40 while skipper Dulaj Bandara came next with 35 runs to his name. Dharmaraja College slipped to 130 runs all-out just 40.2 overs into the game.

In reply, the Zahirian batsmen just let things slip without capitalising on the authoritative position they were in in the game.

Naleen Zeith’s 33 and Mohammad Muffez’s 30 were the only noteworthy contributions as they slumped down to 130 runs. A first-innings tie!

The game was heavily troubled by rain from a delayed start to early stumps on day-one and a repeat of it on day-two.

Ananda College and Lumbini College are fighting the rain gods at BRC grounds in Colombo as day-one came to a close with just 48.3 overs being bowled in the entire day.

Ananda won the toss and batted first, only to be uprooted for 122 runs. Right-arm off-spinner Thashika Nirmal bamboozled the Anandians as he claimed 4 for 31 runs while his partner in crime Ramesh Madushanka picked up 3 for 59. Dineth Nissanka was the only man to show some fight with the bat as he ran out of partners on 38.

Lumbini got 5.4 overs in the day and scored 21 runs losing 1 wicket when the skies opened up.