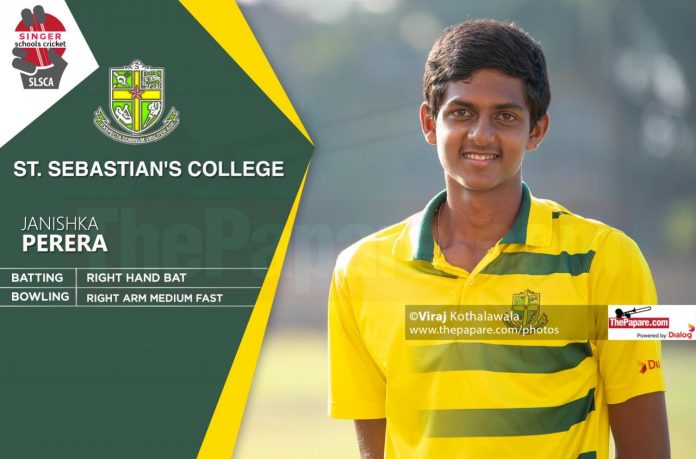 The St. Sebastian’s College skipper won the toss and asked the opposition to take the first lease of the wicket. The decision to bowl first turned out to be a fruitful one as the visitors were able to restrict St. Thomas’ College to just 85 runs in 44 overs. The right handed batsman Hirantha Lakshan was the chief contributor with the bat as he added 30 runs to his name in the hosts’ short innings.

The right arm seamer Janishka Perera was the pick of the bowlers for the Sebastianites as he picked up 4 scalps for just 9 runs. In addition, left arm spinner Thadula de Silva and off spinner Nadeera Fernando gave him good support at the other end as they shared 5 wickets between them.

In reply, St. Sebastian’s College posted 108 runs for the loss of 5 wickets at the close of play on day one. The right handed batsman Dunith Jayathunga top scored and remained unbeaten on 40 runs while Janishka Perera chipped in with 30 runs for St. Sebastian’s College. The 16-year old left arm spinner Sineth Sithara was the pick of the bowlers for the lads from Matara as he took 2 wickets for 35 runs. The match will continue tomorrow for day two.