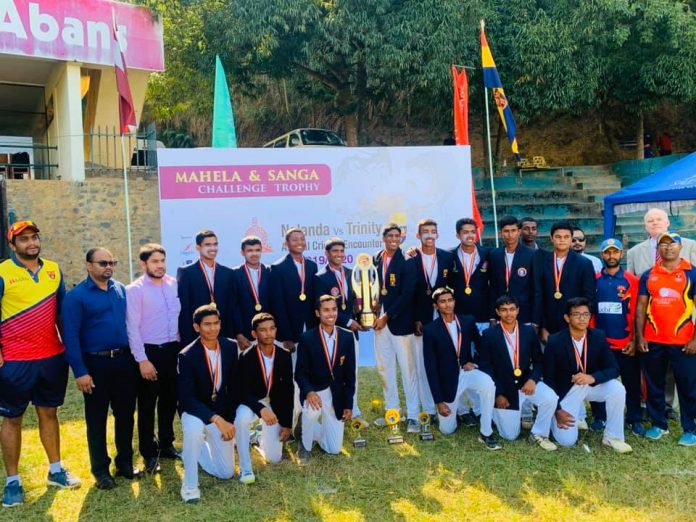 Three matches of the Singer Schools ‘Under 19 Division 1’ Two Day Cricket Tournament 2019/20 were played today across the island.

Read : Trinity on top in day one of the Mahela-Sanga Challenge Trophy

Trinity College registered a comprehensive innings victory over Nalanda College as they recorded their second consecutive Mahela-Sanga Challenge trophy win today at Asgiriya International Stadium in Kandy. The visitors resumed day two on 17 runs for 1 wicket trailing by 115 runs, needing a much improved batting effort to go past Trinity’s first innings score and set a decent target for the hosts.

However, they did not manage to do so, and once again failing with the bat as they posted only 130 runs handing an innings victory for the hosts. Mahima Weerakoon (37) and Ranidu Silva (36) top scored with the bat for the visitors. The off-spinner Abhishek Anandakumar who picked up 3 wickets in the first innings bettered his figures taking a 5-wicket haul for the hosts.

The Group A encounter between Gurukula College and Devapathiraja College ended in a draw today at MRICS in Hambanthta. The first innings points, however, were won by Gurukula College. The Devapathiraja batsmen resumed day two on 64 for 6 and added only 14 runs to the overnight scoreboard, as they were bowled out for 78 runs for their first innings.

Sasitha Ashan was the chief demolisher with the ball as he picked up 5 wickets for just 10 runs. In addition to this, Thushara Sankalpa (3/21) and Praveen Nimesh (2/25) supported him at the other end, sharing 5 wickets among them.

The visitors began their second innings 49 runs ahead and declared the innings at 186 runs for 6 wickets, setting a target of 236 runs for Devapathiraja College. Rashmika Mewan once again top scored for the lads from Kelaniya, scoring 54 runs while Niluka Heshan made 52 runs to his name. Kalpa Chethiya and Irushka Thimira impressed with the ball taking 3 scalps each.

Devapathiraja batsmen had 40 overs to chase down the target of 236 runs but things did not go as planned as they made only 112 runs for 3 wickets when the umpires called stumps on day two. Jeewaka Shashen top scored and remained unbeaten on 63 runs, while Irushka Thimira made 26 runs not out.

The Group D encounter between St. Thomas’ College and Lumbini College commenced today at BRC Grounds in Colombo. The St. Thomas’ skipper decided to bat first after winning the toss and posted 206 runs on the board in 66.4 overs. Nipun Samarasinghe made a classy knock of 73 runs for Matara boys. In addition to this, Sachindu Ransinghe (37) and Hirantha Lakshan (31) chipped in with useful contributions.

Yasiru Yugath (5/86) and Thashika Nirmal (4/47) bowled extremely well sharing 9 wickets among them. In reply, Lumbini College posted 37 runs for 1 wicket at the close of play on day one. The match will continue tomorrow for day two.