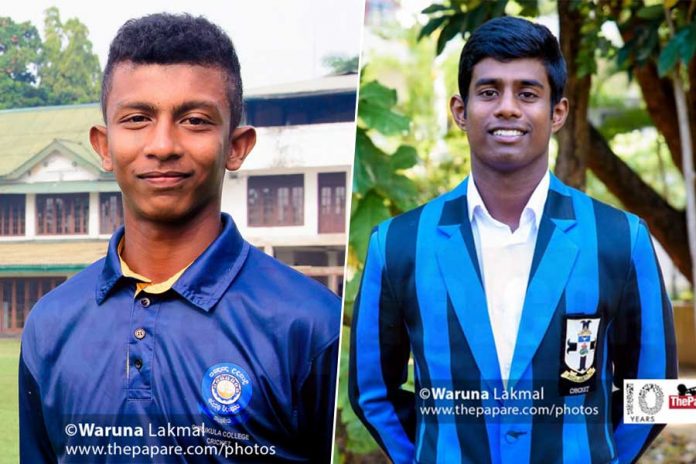 Three matches in the Singer Schools ‘Under 19 Division 1’ Two Day Cricket Tournament 2019/20 were played today across the island. Thevin Eriyagama (5/19) of S. Thomas’ College and Likshan Sasanga (5/15) of Gurukula College stood out with their performances today as they picked up 5-wicket hauls with the ball.

The traditional encounter between Ananda College and St. Anthony’s College ended in a draw today at the Ananda College Grounds in Colombo. The Antonians began their second innings today trailing by just 2 runs and posted 155 runs all-out in 52.2 overs setting a target of 154 runs to win for the hosts.

Bimsara Jayasekara was the only standout player with the bat for the Antonians with a knock of 40 runs. Right arm spinner Isuru Ayesh bowled well to take 4 scalps for 53 runs for Ananda College. In addition, Hansaja Jayasinghe, Dinesh Nissanka and Saviru Bandara took 2 wickets each.

The Ananda College batsmen were well set to chase down the target of 154 runs but the time was not on their side as the umpires called stumps on day two when they were 74 runs for 2 wickets in 24 overs. Kalana Wijesiri remained unbeaten on 26 runs.

The Group B encounter between Moratu Maha Vidyalaya and S. Thomas’ College commenced today at Mount Lavinia. The visiting skipper won the toss and chose to bat first but the decision backfired as they were bundled out for just 116 runs in 39.1 overs. The right arm seamer Thevin Eriyagama dismantled the opposition, taking 5 wickets for 19 runs.

Right arm spinner Dilmin Rathnayake took 3 wickets for 29 runs giving good support for Eriyagama at the other end. In reply, the hosts were in a spot of bother with the bat as they finished day one on 90 runs for 3 wickets. Romesh Mendis made 26 runs with the bat for the hosts while Eranga Hansamal picked up 2 wickets for 30 runs for the visitors.

The traditional encounter between Gurukula College and Lyceum International School commenced today in Wattala. After winning the toss, the visiting skipper opted to field first and the decision worked in favor of them as they could restrict the hosts for just 83 runs. Right arm fast bowler Likshan Sasanga put on a brilliant bowling display, picking up 5 wickets for just 15 runs.

The left arm seamer Praveen Nimesh who took a 9-wicket haul a few days ago, picked up 2 wickets for 23 runs. The Gurukula College batsmen replied strongly with the bat posting 203 runs for 4 wickets at the close of play on day one. Sithija Chamod was the chief contributor with the bat as he stroked an unbeaten 67 runs for the visitors.