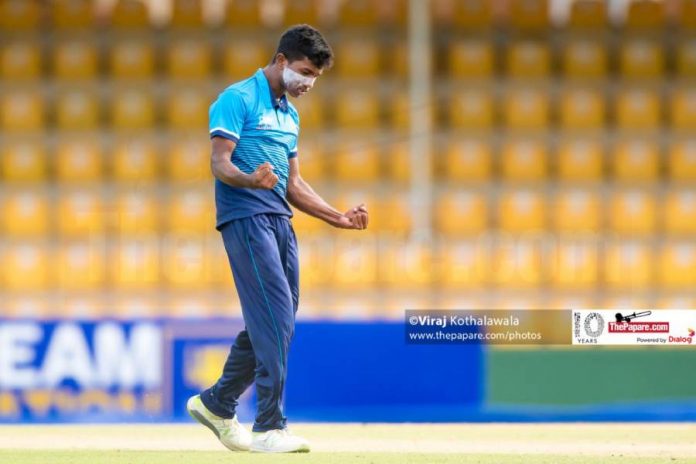 Praveen Nimesh, the left arm seamer from Gurukula College wrecked the St. Servatius batting lineup claiming a 9-wicket haul as they registered an innings victory in the Group C encounter in the Singer Schools ‘Under 19 Division 1’ Two Day Cricket Tournament 2019/20 which was worked off today at Uyanwatta Stadium in Matara.

The St. Servatius College batsmen began their first innings with the bat today in reply to 160 runs piled on by Gurukula College but the incredible bowling effort from the left arm pacer Praveen Nimesh helped restrict them for just 27 runs in 12.5 overs. Sri Lanka U19 cap, Nimesh ripped through the batting lineup of the Kelaniya boys, taking 9 scalps for just 13 runs.

After being asked to follow on, the St. Servatius batsmen had to bat out of their skin to save the match in the second innings but showed only an improved batting effort as they still fell short by 21 runs of Gurukula College first innings. The 15-year-old right-handed batsman Chirath Neththaru top scored with an unbeaten 37 runs for the lads from Matara.