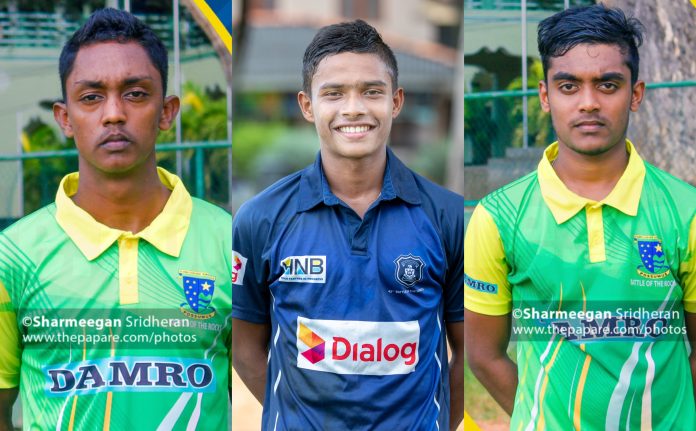 Three matches in the Singer Schools ‘Under 19 Division 1’ Two Day Cricket Tournament 2019/20 commenced today (13), with 3 centuries and one fifer being recorded in a day’s play.

The battle between St Anne’s College and Dharmaraja College was decorated with 2 brilliant centuries by the captain and vice-captain of St. Anne’s, Kavindu Ranasinghe and Lasith Warnakulasuriya, who guided their team to a mammoth 331/9 before claiming a win. Ranasinghe made a 112 and Warnakulasuriya worked his way to 123 before the St. Anne’s bowlers managed to pluck one wicket of Dharmaraja College in the dying hours of the day.

At the stumps, Dharmaraja College trailed by 323 runs with 9 wickets in hand.

Dunith Wellalage, the all-round sensation of St Joseph’s College, launched one of the most memorable innings of this school season as he hammered the Isipathana bowling unit to all parts, also stroking a quickfire 196 to carry St. Joseph’s innings to 402.

Savindu Uthsara of Isipathana managed to secure a fifer, but his efforts weren’t enough to hold off the storm caused by Wellalage. At stumps, the Isipathana openers were unharmed and were behind by 475 runs.

The Sebastian-Joseph Vaz encounter was even stevens at the stumps of day 1, with St Joseph Vaz College being 134/4 and trailing by 140 runs with 6 wickets in hand, in reply to the host’s 1st innings total of 274/9d.

Sukith Prasanna and Nishitha Abilash scored half centuries for the home team while Nethmal de Soyza contributed with a valuable 62 for the visitors.