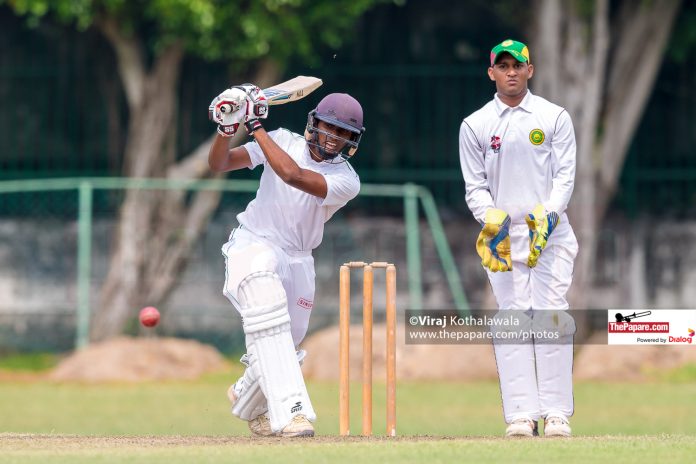 Lumbini College, Colombo met their home-town rivals, Isipathana College, Colombo in a traditional battle between the two teams in the Singer U19 Division One Cricket Tournament 2018/19 at Colts Cricket Club grounds, Colombo.

Lumbini skipper, Dushan Fernando, took everyone by surprise when he won the toss and opted to bowl first on a flat deck which promised to be a batting paradise later on in the day while assisting spin later in the game.

His decision proved to be right when the Lumbini speedster, Sithum Dissanayake, held on to a return catch of Thevindu Dickwella to get the wickets column moving before the runs. Only until Ravindu Rathnayake unfolded his plethora of strokes to rack up his 101-ball 113 runs with 11 fours and 6 sixers. He punished everything on offer for him and was exceptional against anything short.

It was after lunch that Lumbini found their way back into the game as they took Isipathana down from 138/3 to 218 all-out. Lumbini spinners who were mostly in the shorter side in the first session found their rhythm post lunch.

Ravishka Wijesiri was the pick of the bowlers as he bagged a fifer with some gritty turn off a flat surface. Fast bowler Dissanayake was very impressive as he did a bulk of bowling on the day. He had raw pace and a lot of courage in him though he managed only one wicket. His steep bouncers were exciting to watch.

Coming back to bowling, Ravindu Rathnayake struck once again with his very first delivery when he found the inside edge of Kavindu Fernando, which ricocheted onto the stumps. The fast bowlers from Isipathana bowled well in tandem. Particularly, the lanky left-armer Dinath Dissanayake, who picked up 3 wickets by bringing the ball back sharply into the right-handers.

D. S. Senanayake recorded the second outright win of the season as they beat new-comers to the top division..

It was rather a cake-walk for the Isipathana bowlers as they ran through the Lumbini line-up in no time. Lumbini College were bowled out for 78 runs and then asked to follow-on by the hosts’ Isipathana College. It was an awful display of batting from Lumbini, with the top scorer being Sandunil Sankalpa, who made 28, while there were 5 ducks and 2 ones in a sorry looking batting card.

Lumbini batted four maiden overs in the follow-on and ended the day wicket less in their second innings.

Video – The Mathews-Mendis stand will boost the entire team –...