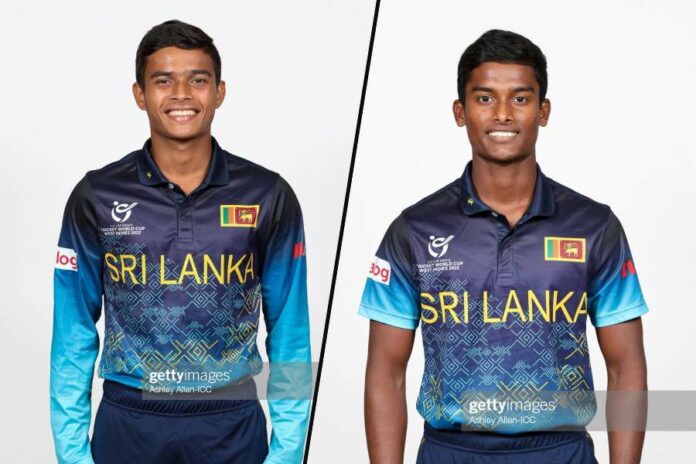 Sri Lanka U19 got their World Cup campaign off to a solid start as they beat Scotland U19 by 40 runs in their first game of the ICC U19 World Cup today (14th January).

Having won the toss, Sri Lanka Skipper Dunith Wellalage chose to bat first at Everest Cricket Club Grounds in Georgetown. The left-handed duo Chamindu Wickramasinghe and Shevon Daniel opened the batting for Sri Lanka, but their stand lasted for only 1.5 overs as the in-form batter Daniel ran himself out for just 4 runs.

Wickramasinghe and number three batter Sadisha Rajapaksa then added a vital 52-run partnership for the second wicket before the former was dismissed for 28 runs in the 10th over. After the dismissal of Wickramasinghe, the islanders witnessed a batting collapse as they lost half of the side for just 78 runs in 13 overs.

The left-hand batter Sakuna Liyanage and Skipper Dunith Wellalage tried to rescue the innings, but they were unable to add only 21 runs as the latter departed for just 10 runs, putting pressure on the tail-enders to deliver with the bat.

Liyanage and Raveen De Silva built a match defining 77-run partnership for the 7th wicket as Sri Lanka U19 posted a respectable 218 runs on the board. Liyanage top-scored with 85 runs off 85 balls, with 3 fours and 4 sixes.

In reply, Scotland got off to a slow start as they made only 25 runs for 1 wicket in the first 10 overs. The Sri Lankan bowlers continued to put screws on the opposition as the batters found it difficult to accelerate with the asking rate climbing high.

The Scotland U19s were eventually restricted to 178 runs, handing a 40-run victory for the islanders. The Skipper Wellalage was the pick of the bowlers for Sri Lanka as he snared 5 wickets for 27 runs.