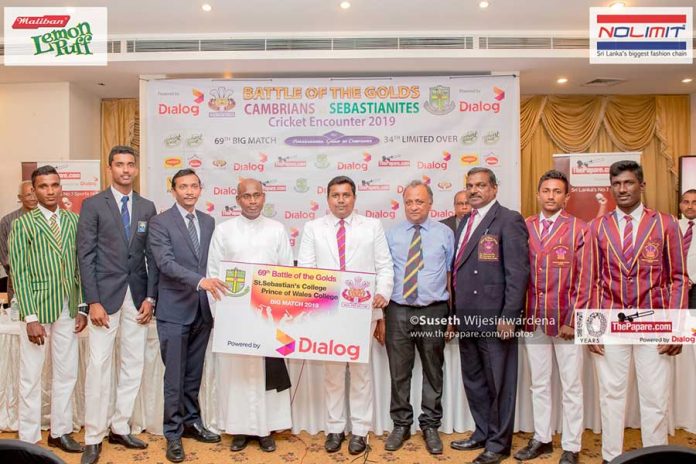 The Moratu Giants, Prince of Wales’ College and St. Sebastian College will lock horns for what will be the 69th time in the Battle of the Golds at De Soysa stadium on 15th and 16th of March and 34th annual limited over encounter which will follow at the same venue on the 17th.

The press conference for the mega event which will gather Moratuwa into just one place was held on Tuesday, 5th of March with the participation of Old boys, School Cricket teams and the Organizing committee at Janaki Hotel, Colombo.

So far, the Cambrians have the slight edge in the records as they lead the victory column with 6 to Sebastian’s 3 wins. But in limited overs encounters, the roles are reversed as Sebastians have an impressive 17-13 lead.

The historic clash between the two prestigious colleges in the country began in 1933 as an initiative of the then Principle of Prince of Wales’ College J.B.C. Rodrigo and Rector of St. Sebastian’s College Rev. Bro. Bonaventure at the Cambrian grounds.

Nawanindu Fernando who is the younger brother of Sri Lanka Test Cap Vishwa Fernadno will lead the St. Sebastian team this time while the impressive all-rounder Suwath Mendis will guide the Cambrian’s unit for the first time.

“The most important thing will be the brotherhood between the two colleges and we are bound to protect that. We are well prepared and waiting to show that in the middle and win it for Mother Wales” – Cambrian Captain, Suwath Mendis was confident about his teams’ chances ahead of the clash.

Nawanindu expressed that their team has done really well in the ongoing U19 Cricket Tournament and are keen to continue that form into the big match as well. He further added that unlike the last time’s draw, Sebastians are looking for a win.

These two colleges have produced more than a handful of players to the motherland in the likes of Avishka Fernando, Vishwa Fernando, Oshada Fernando, Kusal Mendis, Lahiru Thirimanna and Shehan Jayasuriya to name a few.