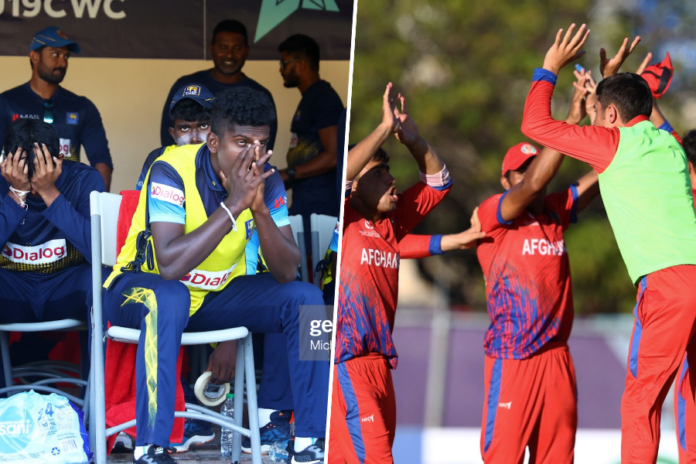 Sri Lanka U19s skipper Dunith Wellalage won the all-important toss in the knockout game and invited the Afghan batters to take first lease of the wicket.

The Afghan opening pair got them off to a slow start in the first powerplay putting on 24 runs on the board. But straight after the first 10 overs, Sri Lankan bowlers managed to strike, demolishing the Afghan top order as they took 4 wickets inside the next 5 overs conceding only 4 runs to the opposition.

Abdul Hadi and Allah Noor showed some resistance with the bat adding a 47-run partnership for the 5th wicket. But Sri Lankan bowlers led by speedster Vinuja Ranpul continued to pick up wickets at regular intervals as they restricted Afghanistan to 134 runs in 47.1 overs.

Ranpul was the pick of the bowlers for Sri Lanka as he managed to take a 5-wicket haul for just 10 runs in 9.1 overs. Skipper Wellalage also chipped in with 3 wickets while the off spinner Traveen Mathew bowled a very economic spell giving away only 13 runs in 10 overs with 4 maidens and a wicket to his name.

Chasing 135 runs to win, Sri Lanka got off to a disastrous start losing their first 4 wickets for just 24 runs inside 12 overs. Opening batter Chamindu Wickramasinghe tried to rescue the innings holding one end up but his resistance came to end with an unfortunate runout in the 17th over, putting Sri Lanka under huge pressure at 6 for 49.

Sri Lanka’s last hope rested on  skipper Wellalage who tried his best adding a crucial 69-run partnership for the 8th wicket with Raveen De Silva but was unable to pull the islanders over the line as they suffered a nail-biting 4-run defeat.

Sri Lanka’s poor running between the wickets cost them the game as they conceded 4 runouts, handing the the spot in the semis to Afghanistan despite the target being only 135 and the Afghans bowling 32 wides.

Afghanistan U19 won by 4 runs