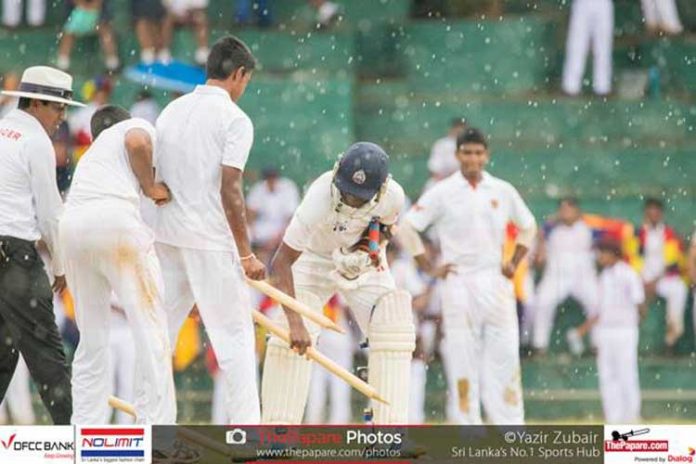 Kandy is better known for its love for Rugby and undoubtedly has the most dedicated fans of the oval shaped ball game in the country.

The Hill capital also boasts of a rich history in cricket with two of the leading big matches in Kandy having been played for over a century. The likes of legendary Muttiah Muralidharan, Kumar Sangakkara learned their basics in the hills before moving on to conquer the world and are the biggest cricketing icons to have emerged from the region.

The Annual Big Match is the crowning glory of all the young cricketers who represent their Alma Mater. For most of these young men, the big match will be the highest echelon they will reach in their cricketing career. However, it is unfortunate that most of these young men are left wondering what if, as most times than not rain and bad light becomes a foe hampering play and stealing valuable time.

Although the Hill country battle of the Maroons where Kingswood play Dharmaraja (112 encounters) and Hill country battle of Blues where Trinity play St. Anthony’s (101 encounters) have both surpassed the 100th game mark, which traditionally warrants the game to be moved to a 3day encounter, these are still played only through 2 days. This year in Pallekele, the Rajans put the Kingswoodians to bat after winning the toss and managed to bundle them out for 166 but lost their way as they were bowled out for 111. Kingswood college added a quickfire 184 for the loss of 5 wickets and handed a target of 240 runs. Dharmaraja college who had 40 overs to chase down the target lost 8 wickets for 122 runs leaving the Kingswoodians were within arm’s reach of a famous victory.

At Asgiriya Trinity won the toss and put the Anthonians to bat and managed to bowl them out for 115 runs, the Antonians fought back and bowled out Trinity out for 196 runs and were looking settled at 62/2 in their pursuit of the Trinity 1st innings lead.

ALAS the most consistent participant at the Kandy big matches and the usual culprit who plays spoils sport, rain and bad light washed off the hopes of the young cricketers and the ardent fans alike.  It derailed both matches robbing what looked like a certain victory for the Kingswoodians due to bad light at Pallekele and in Asgiriya the downpour halted a contest that was shaping up to be a thriller.

Having been a regular to the Trinity vs St Anthony’s big match since the turn of the millennium, the writer cannot remember a year where rain has not hampered play. Even the momentous encounter which was played last year saw the better part of the second day being lost to rain which left hundreds of old boys from both institutions who had flown down from all over the world to witness the centenary encounter, disappointed.

During the second week of March, the writer traveled as a member of ThePapare.com crew to Jaffna, the capital of northern peninsula to webcast the 112th Battle of the North between St. John’s College Jaffna and Jaffna Central College. A three-day contest which had a carnival atmosphere was an absolute thriller with the game being won by Jaffna Central college by 01 wicket in the penultimate over of the third day and was a nail bitter despite being played on a matting and in a ground which offers no fight to the likes of Pallekele or Asgiriya stadiums. As a neutral and most importantly a fan of the game it was incredible to see the competitiveness and the hunger to get the win from both teams.

Young school boys are expected to make a lot of sacrifices to be able to keep up with the college curriculums and at the same time perfect their cricketing craft so they could represent the 1st XI cricket team of their Alma Mater. After a season that lasts over a span of 6 to 7 months where the youngsters toil and strive their best to be part of the team that takes the field at the Big match, it’s is unfair that they are forced to sit in the dressing rooms staring at the raindrops that steal their moments of glory.

While a counter-argument can be made that the RoyTho, the longest running schools big match which is a three-day encounter does not provide results often, one has to realize that despite not reaching a decision the game provides a great contest for the players and the spectators alike. While moving the games in Kandy to three days will not guarantee a result year in year out, it will no doubt provide a better contest for the spectators that gather in their numbers and most importantly will provide the young cricketers who make many sacrifices a better chance at playing for a victory in what might be the biggest game of their life.