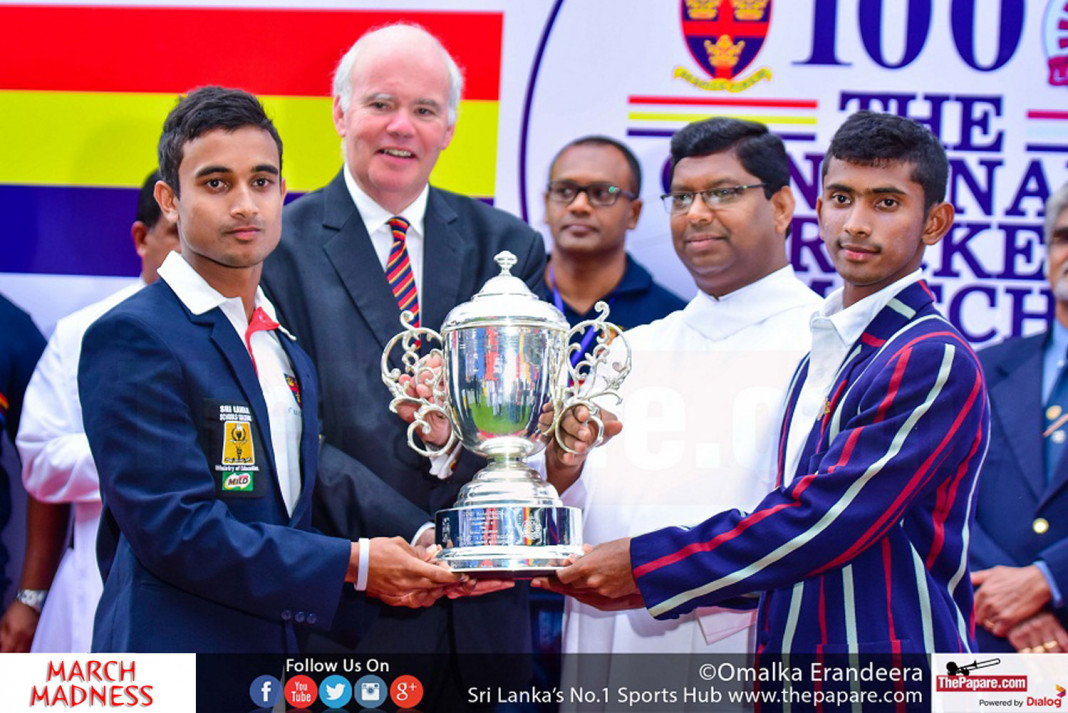 Continuous rain halted play at the centenary Trinity-Antonian battle at Pallekelle as the second day of play was also washed out and the 100th encounter concluded without a result after the Antonians were 99 runs for the loss of 6 wickets.


The centenary Trinity Antonian which began yesterday (10th) saw the Lions taking the field after winning the toss and compiling a total of 204 for the loss of four wickets before play was stopped owing to bad light and rain.

Resuming play early morning, the Antonians struck early to take out Poorna Wanasekara off the bowling of Virajitha Jayasinghe. Trinity batted another 17 more overs on the second day with Thyagarajah Banugoban and Trewon Weerasooriya anchoring Trinity to 270 runs before the declaration.

Taking the field, Trinity’s under 19 cap, Thisaru Dilshan took out the two opening batsmen in a span of three overs as both Sunera Jayasinghe and Mohammed Absar left the field when the Antonians were 16 runs.

Wickets kept falling for the Antonians with skipper Mohammed Alfar also making his way to the dressing room having scored only 8 falling prey to the bowling of Trewon Weerasooriya.

With the Antonians in a pressurized situation, skipper Shanogeeth opened up his spin department allowing Vimukthi Kotikawatte to start his spell.

Trinity College who excelled in all three departments of the game had to miss out on an important 1st innings win due to the bad weather.

It could be said that the rain was a blessing in disguise for the Antonians who were struggling in both batting and bowling. With 99/6, had there been more overs played, Trinity would have surely counted on their bowlers to play for a result.

For the Antonians it was Janidu Himsara who top scored in their 99 run 1st innings, scoring 34 runs. Kotikawatte picked 3 wickets while Thisaru Dilshan took two and Trewon Weerasooriya took one.

Despite the excitement and the build up to the centenary, the game failed to live up to the expectations due to the bad weather conditions. Trinity College would be thoroughly disappointed with the result as they had the momentum on their side.

Hasitha Boyagoda was adjudged Player of the Match for his knock of 90 runs.