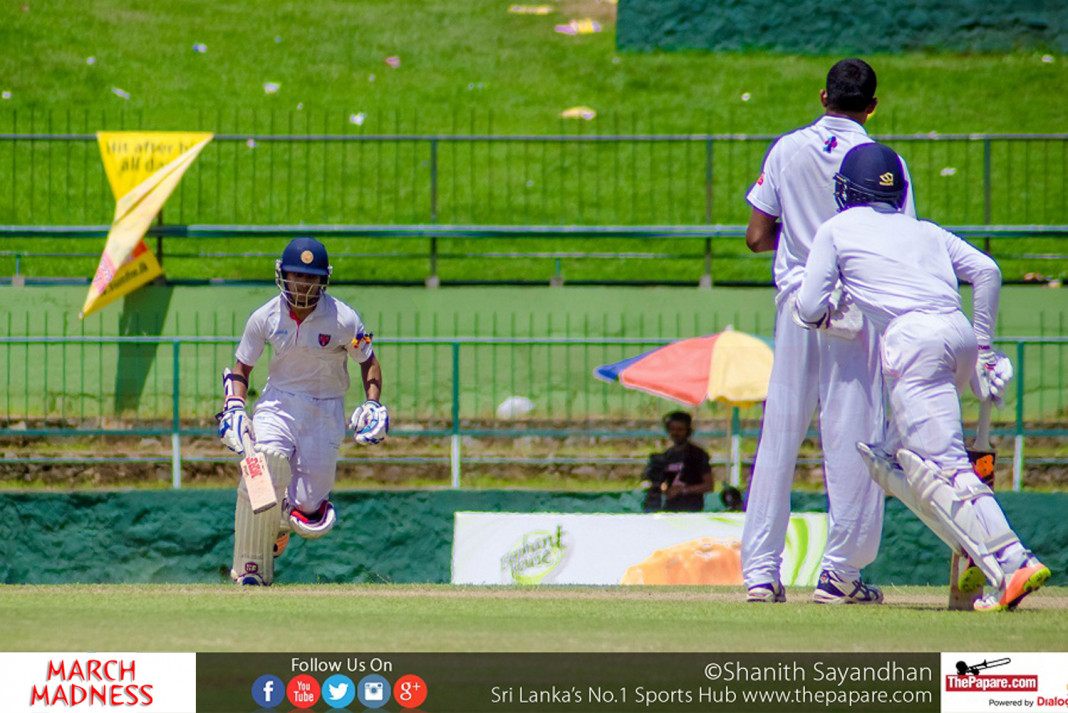 Two fighting knocks from skipper Shanogeeth Shanmuganathan and Hasitha Boyagoda saw Trinity build a 200 run stand before the umpires decided to suspend play for the first day due to bad light that was later followed by heavy showers.

The centenary Trinity-Antonian cricket encounter that kicked off at the Pallekelle International Cricket Stadium in the presence of the spin wizard Muttiah Muralidaren who grazed the occasion as chief guest, saw the Trinity skipper Shanogeeth Shanmuganathan winning the all- important toss and opting to bat first.

Shanumganathan’s decision to bat first went on to be advantageous for the Lions but the Antonians struck in the 6th over to take out opening batsman Hasintha Jayasuriya having only scored 7 runs.

Joining the skipper at 12/1 was the experienced Hasitha Boyagoda and the duo went on to build a 157-run partnership for the second wicket. Skipper Shanogeeth stood out taking full control over conditions conducive to batting, playing all around the park.

Shanogeeth scored 83 runs that included 9 fours and 2 sixes before getting caught off the bowling of Mohamed Alawi. The steady pace in which the runs were scored in the Boyagoda-Shanogeeth stand gradually saw drop with the skipper leaving the field.

The Antonians struck once again to remove middle order batsman Channaka Bandara without scoring any runs thanks to some sensible bowling from Mohammed Alawi.

With scores reading 179/3, it was Hasitha Boyagoda who carried momentum forward but missed out on an important century as he was caught and bowled by Alawi just 10 runs short of a century.

The 90 runs that Boyagoda scored included 6 fours and 2 sixes as Trinity were 204/4.

Currently at the crease are Poorna Wanasekara who is 6* and Trewon Weerasooriya is yet to start his innings.

After two brilliant stands from the experienced campaigners, Shanogeeth and Hasitha Trinity took retaliated in their run-rate but managed to scored 204 runs in 61 overs before the umpires decided to call it a day due to bad light.

For the bowling department, it was Mohammed Alawi who was the most successful bowler picking up 3 wickets that included the ones of Shanogeeth and Boyagoda.

Trinity would have been looking at finishing their first innings with a comfortable 230 runs but with 29 overs to go, the first day did not live up to the expectations. Both schools would have wanted to play the entire 90 overs but the weather gods decided otherwise.

Play is expected to resume tomorrow at 9.00 a.m.