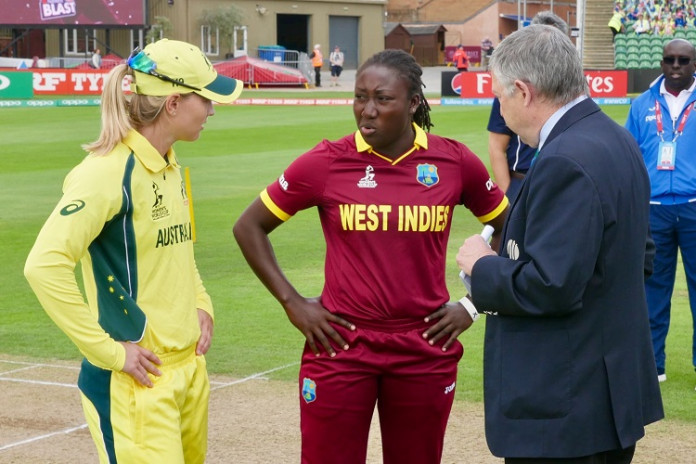 Australia’s opening Women’s World Cup match with West Indies has gotten off to a heated start before a ball was bowled, with a debate between the opposing captains about the result of the toss.

“We think early on the pitch might do something so we hope we will get the advantage.“

But Taylor had already informed Lanning and the match referee David Jukes of her intention for the Windies to bat first. 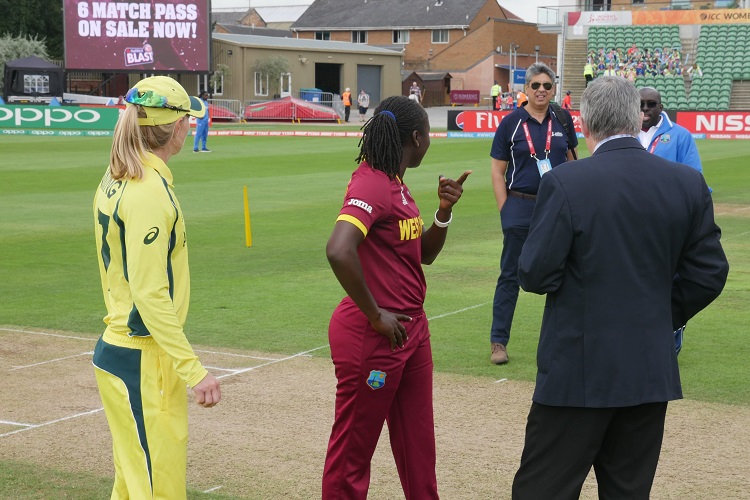 The confusion became apparent when Lanning was interviewed, the Australian telling Bishop she “would have bowled anyway“.

“We were going to have a bowl so we’re looking forward to getting out there as a team and getting the World Cup started,” Lanning said.

It was only after that interview that Lanning realised Taylor had announced publicly that the West Indies would be bowling.

The Australian skipper demanded Jukes clarify the outcome of the toss, with Taylor recalled to the middle. After several minutes of heated discussion, it was ruled that the Windies’ original decision must stick and Australia would bowl.

Lanning’s squad took their first look at the County Ground on Sunday, going through their paces one final time before their campaign for a seventh title at the 50-over tournament gets underway from 7.30pm AEST (10.30am local).

The decision to go with more spin ahead of either of the uncapped pace duo of Aley and Vakarewa was a late one, with the Australians undecided on the match eve.

Lanning said she expected spin to play a big role in the tournament.

“I think generally, pace off in the women’s game is very effective, whether that’s spin or medium pace,” Australia’s captain said on match eve.

“We’ve got some good spinners in our line-up who’ve done a good job over a long period of time, so I’m looking forward to seeing them playing well and I expect the Windies to throw in a few spinners as well.“

Leg-spinner Amanda-Jade Wellington remains a fitness concern after she missed both warm-up matches due to an injury to her right forefinger.

Good form from the Australian batting group since arriving in England meant there was is unlikely to be any change to the regular top seven of Beth Mooney, Nicole Bolton, Meg Lanning, Ellyse Perry, Elyse Villani, Alex Blackwell and Alyssa Healy.

That leaves veteran stroke-maker Rachael Haynes the unlucky batter to miss out in Taunton.

With Perry and Megan Schutt to shoulder fast bowling duties, consistent performances from left-arm spinner Jess Jonassen have seen her maintain her position in the XI.

That left off-spinning allrounder Ashleigh Gardner, leg-spinner Kristen Beams and uncapped seamers Aley and Vakarewa fighting it out for the final two berths, with the extra slow-bowling threat winning out.

Lanning expects a typically high-scoring match at the venue which earlier this month saw 834 runs scored in a one-day domestic match.

“Generally the scores here in one-day county matches have been very good and the wickets we practiced on (Sunday) came onto the bat pretty well,” Lanning said.

“We’re expecting the wicket to be pretty good for batting with lots of runs in it, so hopefully the batters can cash in.”

A cloudy but dry day is forecast for today’s match, the Australians eager to get the tournament underway after two weeks of training and warm-up matches since arriving in the United Kingdom.

“We’re really looking forward to it,” the skipper said. “It’s been a long time coming, the preparation has been long but great and we feel like we’ve had enough time to get used to the conditions in the UK.

“Now everyone else is playing, we’re itching to get out there and get started.“