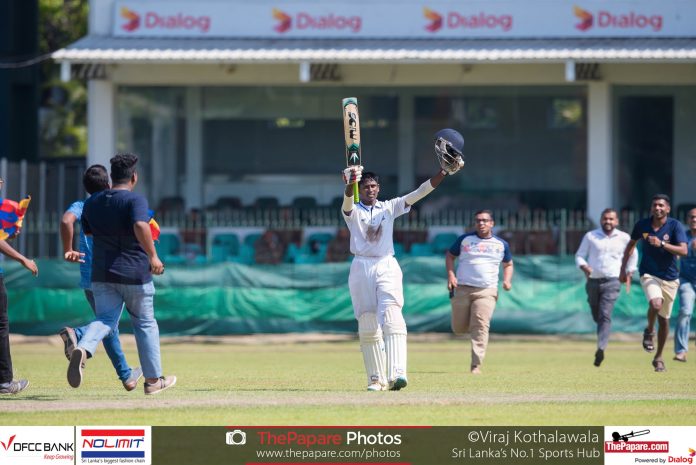 An unbeaten 125 by fresher Jayavihan Pradeepta propelled Thurstan College to a massive 314 runs in their first innings in the 55th Battle of the Brothers against Isipathana College at SSC grounds on Friday.

With the inclusion of the 60-over rule in the first innings, the Battle of the Brothers was livened up this year. Isipathana College skipper Ayana Siriwardana won the toss and elected to field first. The seamers started off with a good burst but the fielders let them down with a few chances gone begging.

However, a collapse after the opening stand saw Thurstan in a spot of bother at 33 for 3. Jayavihan Pradeepta and Nimesh Perera managed to see off the new ball and take their team to lunch at 79 for 3.

After lunch, with the wicket easing out, batting got much easier. Both Jayavihan and Nimesh took control of proceedings and stepped on the gas. Jayavihan was the first to his half century and Nimesh followed shortly after. Nimesh couldn’t continue after reaching his half century as he sustained an injury and had to be carried out of the ground.

The injury was a blessing in disguise for Thurstan as it paved the way for a brilliant knock from Sawan Prabash. He came in and absolutely bludgeoned the ball all around the park. His knock of 50 came off 25 deliveries and included 3 boundaries and 4 sixes.

On the other end, Jayavihan slowly but steadily chipped his way through to a magnificent century. He came in at a pressure situation and carried the bat through the innings. Towards the latter part of the innings, a few lusty blows from Skipper Nipun Lakshan and Jayavihan helped Thurstan reach 314 for 5 in their allocated 60 overs.

Isipathana came into bat in the third and final session. Their openers looked good early on but a lack of concentration from Thevindu Dickwella saw him top edging one straight to cover. Sanjula Bandara and Leshan Amarasinghe followed shortly and put Isipathana in trouble at 31 for 3.

Former U19 National cap Sanjula Abeywickrama got together with Ashen Gunawardane and consolidated but Ashen failed to capitalize on his start as he got himself run out for 14.

Isipathana was feeling the heat and it was up to the two most senior batters Sanjula Abeywickrama and Skipper Ayana Siriwardana to keep the ship sailing for the green army. They were successful as they took the team to the end of play. However Isipathana are still trailing by 194 runs, needing 95 runs from 21 overs to avoid the follow on.