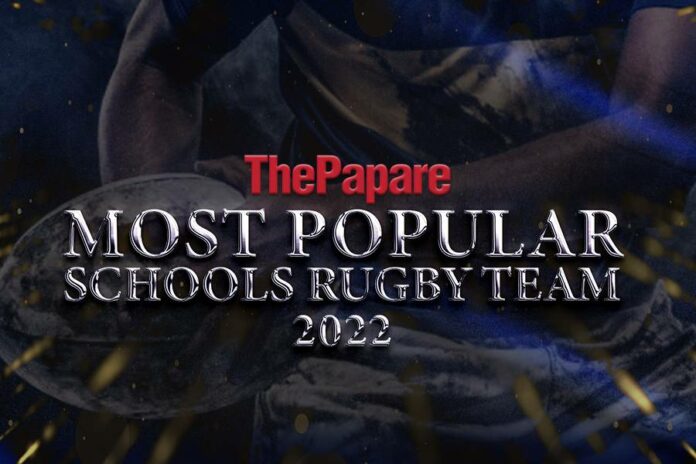 The comeback season of Schools’ Rugby, after a two-year-long forced hiatus, was an eventful one with thrills spills, and plenty of high-tempo action which kept the spectators at the edge of their seats.

The young warriors proudly representing their alma mater did not disappoint, dishing out high-quality rugby week in and week out making the 2022 season, one to remember. Schools’ rugby is widely considered the most followed sport domestically and despite the two-year lapse, the die-hard fans returned to the grounds in large numbers clad in the livery of their beloved teams.

With the fans showcasing their passion throughout the season for their respective teams, we at ThePapare.com decided that it is fitting to find out which schools rugby team out of the 60 schools teams that competed in the Dialog Schools’ Rugby Division 1 – Segment A, B & C, and Division 2 Segment B & C is the most popular in the Island.

ThePapare Most Popular Schools Rugby Team 2022 competition will be worked out in two phases with the first phase of the competition commencing at 3.00 pm today (16th September) where the fans will be able to vote for their favorite schools rugby team on a web vote until 11.59pm on the 23rd of September. The top 30 teams that receive the most number of web votes will be shortlisted and will advance to the next phase of the competition where the schools rugby team that recieves the most number of SMS votes will be crowned  ‘ThePapare Most Popular Schools Rugby Team 2022’

All 60 schools that took part in the recently concluded Dialog Schools Rugby League, competing in Division 1 and Division 2, will be part of Phase 1 (web vote) of the competition. The top 30 teams at the end of the 1st Phase, will progress to Phase 2 (sms voting).

In Phase 1, only one vote per user will be allowed every 24 hours.

The top 30 schools shortlisted from the web voting round will progress to the SMS voting round.

Phase 02 of the competition, the SMS voting round, will be from 25th September 3.00pm to 6th October, 5.59pm, at which time ThePapare Most Popular Schools Rugby Team will be crowned.

A unique code will be provided for each of the 30 schools to be used in the SMS vote.

– SMSs can only be sent via Dialog connections.
– Any number of votes can be sent from one phone connection.
– Overseas numbers cannot be used to vote.
– SMS charges per vote will be Rs. 2.50/= + tax.
– Votes from Phase 01 (web vote) will NOT be carried forward to Phase 02.
– The winner will be picked based on the number of SMS votes from Phase 02.
– ThePapare.com’s decision will be final