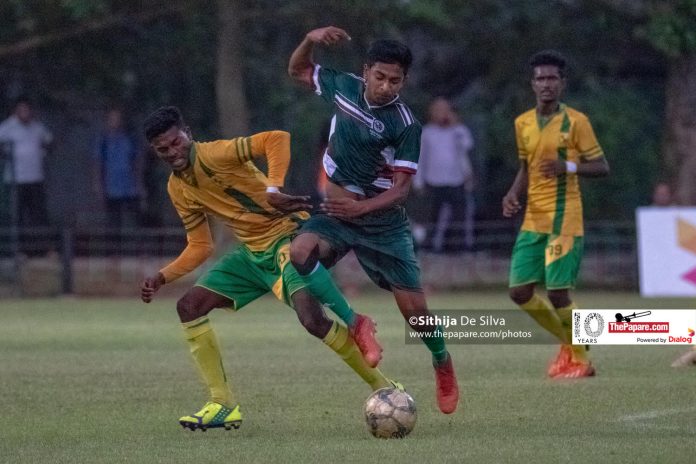 The self-proclaimed ‘Kings of Schools Football’, Zahira College, Colombo got one step closer to claiming ThePapare Football Championship 2020 title, making short work of their opponents from Jaffna, St Patrick’s College to secure a 3-1 win in the semifinal between the two teams at the Racecourse International Stadium earlier today (19).

Pre-tournament favourites and with a star-studded lineup at their disposal, Zahira College came into the game after a comfortable 3-0 win in the quarters against a decent line-up from De Mazenod Kandana. The game against St Patrick’s held added importance as the Patricians were the team that knocked Zahira out of the tournament at the quarter-final stage last year.

True to their tag of being favourites, the Maradana boys dominated the early phases of play, clearly just too big, too strong and too fast for the Patricians who took a while to settle into the game. The sustained pressure up front paid off in just the 8th minute when Roomy Raza put Mohammed Sajid through for an easy goal.

The Zahirian attack kept the pressure on the Patrician defense, with National cap Mohammed Aakib making inroads despite being heavily marked. The same pair that had combined for the 1st goal came together once again to double Zahira’s lead in the 22nd minute, with Sajid this time slotting in from a difficult angle, straight through the Patrician goalie’s hands.

The game seemed almost done and dusted for the Zahirians who completely dominated and should maybe have had a couple more goals in the first 35-40 minutes of play with the likes of Aakib and Shareeq Ahamedh missing a couple of opportunities.

However, it was St Patrick’s who next got on to the scoresheet, when a Zahirian defender was penalized for handling the ball inside the box. It was just the lifeline the boys from Jaffna needed as Rajikumar Shanthan calmly slotted the penalty into the back of the net, past a diving Mohammed Shakir to pull one back just before the break.

The goal seemed like exactly what St Patrick’s needed to get back into the game as their defense got tighter in the 2nd half and they too began making a few attacking plays in the Zahirian half.

Aakib was the main threat to the Patricians and their goalie Alon Arnold was forced to make some saves off the boot of the Zahirian No. 7. The striker came close to scoring his team’s 3rd on numerous occasions, only to be denied by some desperate defending until he decided to take a long-range effort and smoked one through to the top right of the net in the 84th minute.

St Patrick’s had one last attempt at goal when Nageshwaran Baviraj struck a freekick well towards goal. Shakir misjudged the ball in goal, fumbled but managed to clear it off the line to keep St Patrick’s goalless in the 2nd half.

ThePapare Football Championship Final, between St Peter’s and Zahira College Colombo will be held on the 26th of February at the Racecourse International Stadium. Keep it logged on for more details.