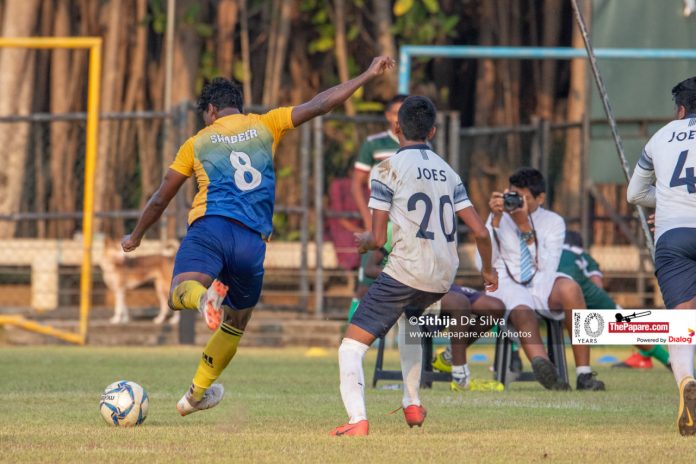 St Peter’s star forward Shabeer Razooniya sent defending champions and archrivals St Joseph’s College out of contention for the ThePapare Football Championship title after his 89th minute strike secured a 3-2 win for the boys from Bambalapitiya in the semi-final between the sides held today (19) at the Racecourse Stadium.

Razooniya came into the game in red-hot form having scored a hattrick against St Henry’s, Jaffna in a thriller of a quarter-final that ended 6-4 in favour of the Peterites and got on the board straight away with a clinical finish to send the Petes ahead in the 2nd minute of the game.

From that point onwards it was a game of catch-up for St Joseph’s who rely heavily on their ace striker Shenal Sandesh. The diminutive No. 7 did not disappoint when he nudged in from close range to equalize after Peter’s goalie Pratish Ravichandran’s save fell into his path.

Though St Peter’s dominated the early phases of the game, the Joes got right back into it with the half time break drawing closer as Sandesh looked increasingly menacing up front. Despite the pressure, St Peter’s managed to hold on to go into the break with the scores level.

A scrappy start to the 2nd half saw the ball moved from end to end with neither team managing to really string together too many good phases of play, however, St Joseph’s big opportunity came in the 65th minute of play when Sandesh was brought down in the box by a tiring Kanjuka Wijesinghe. Referee Tharanga Pushpakumara pointed to the spot to the elation of the defending champs however, Sandesh, quite uncharacteristically, missed out on the golden opportunity, hitting the post with a low shot aimed at the bottom right corner of the goal.

He made amends just 4 minutes later however as he had no trouble sending a beautiful through ball from substitute Pathum Gimhan into the back of the net to take his goal tally to 10 in the tournament.

The continued to move back and forth through the half but St Peter’s began showing a little bit of the dominance they had earlier in the game, putting some pressure on the Josephian back line. The defense finally cracked, when a freekick from Razooniya from the right wing was headed in by Arjunan Praveen despite the desperate efforts of the Joes.

With the game level and the clock winding down, Razooniya took it upon himself to deliver the killer blow, gathering a long ball from Areeb Hussain and the expertly maneuvering himself around 3 defenders inside the box to score in the 89th minute.

ThePapare Football Championship Final, between St Peter’s and Zahira College Colombo will be held on the 26th of February at the Racecourse International Stadium. Keep it logged on for more details.