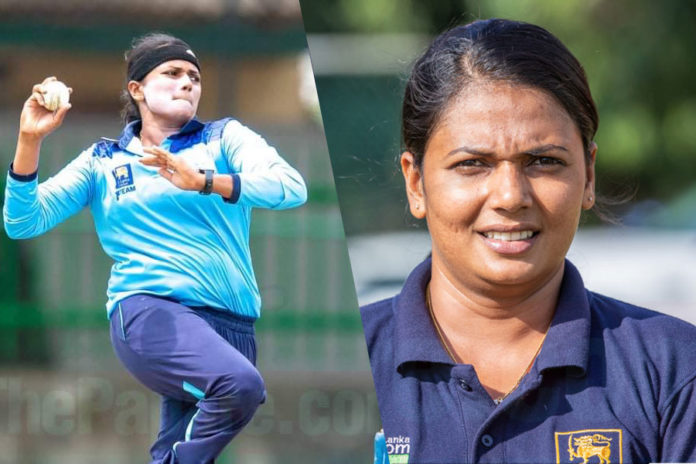 Wijesuriya Arachchige Harshani Maduwanthi might not be a name that you’ve heard of when it comes to first class cricket in Sri Lanka, but she has been one of the very few female cricket scorers in the country for the past few years.

An Airwoman herself, she has been scoring for the Air Force SC in the SLC Premier League Tier B Tournament, while also representing Air Force in the Women’s domestic competitions. We at ThePapare.com caught up with her for a Question & Answer session on her cricketing life.

Q. Tell us a bit about yourself?

A. I am Wijesuriya Arachchige Harshani Maduwanthi. I am from Marawila and I schooled at the Holy Family Convent, Marawila.

Q. What made you take up the sport and get involved with it?

A. I actually started off at a club. It was called the Xavierites Cricket Club which was also in Marawila. I should be thankful to Mrs. Herath. She was the one who inspired me to take up the sport before I fell in love with it.

Q. From playing cricket to taking up scoring, how did that happen?

A. While I was playing cricket, I always wanted to learn how to score properly but I had never really given it a shot. I had a great desire for it. I waited for a long time to complete the scoring exam and I finally managed to successfully complete it 2016.

Q. You are an Airwoman too which does keep you busy for sure. Tell us a bit about that?

A. I joined the Sri Lankan Air Force in April 2011. I was playing for the Parlians Cricket Club before that. I was mainly involved with the cricket team at the Sri Lanka Air Force and I have enjoyed every bit of it.

Q. There are a very limited number of female scorers in the country. What sort of challenges do you face being involved with first class cricket?

A. Yes, I think there about five of us. When I think about challenges, I must commend the support we get from all officials involved in a game. Though we are almost always the only female person involved in the game, the players are actually very protective of us. Even the opposition scorer or the match referee always checks on us. The umpires too, all of them are very protective of us.

I am actually really thankful to the Air Force because of the support they have provided me over the years, not only as a player but they helped me complete my scorers exams as well.

Q. The support you get from the family is very important as cricket is a very time-consuming sport. What sort of reaction have you got from your family?

They have been very supportive. I have two older sisters and my mother now. My father was very supportive too before he passed in 2013. My oldest sister has actually been a motherly figure to me as my mother fell sick. Even my other sister and her husband has always made sure to take care of me especially after the loss of my father. Whatever I’ve achieved today is because of all these individuals and I’m so grateful to them.

Q. We’ve spoken about Maduwanthi, the scorer. But what about your career as a player?

I’m still very much involved as a player for the Air Force Women’s cricket team. We have a couple of teams from the Air Force and I’m actively involved with it. I’ve been playing division 1 cricket since 2007.

Q. Finally, tell us a bit on your future aspirations?

I actually want to be one of the best scorers in the country and continue to serve the game I love as a scorer. I believe it’s always a privilege to be doing what you love.