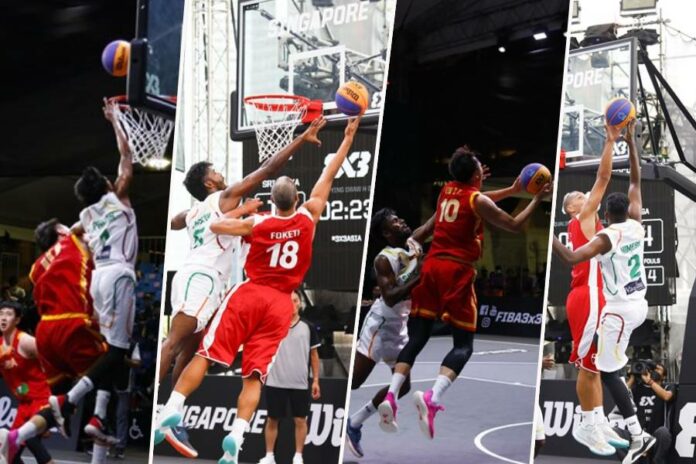 Sri Lankan speedster Pawan Gamage returned to the Asian arena with a 3-point show off which led islanders to emerge the victory in their first game at FIBA 3X3 ASIA CUP. Team Sri Lanka crushed Tongan players over extra as final scores stood at 21:19.

The game was squared 18 all as the final buzzer rang with the unexpected 3-pointer by Marcus Christian of team Tonga. Sri Lanka’s perfectly planned offensive strategy outsmarted their opponent at the overtime period. While Tongan players were wrapping their offense beyond the arc, Islanders were concentrating on slow paced winning.

Tongan players looked to be top in the first few minutes of the game, it was the time-out taken by Lankans to get back on their feet. After a much-needed short break, Lankan lads found their pace, Pawan Gamage’s double 3-pointers helped to cut down the deficit and there onwards Sri Lanka took hold of the game.

Even though Sri Lanka is best known for their defensive strategy, the boys were unable to pressure the Tongan players. They were rather focused on crossing that 21-point mark which they successfully did in the first match. Dasun Nilantha was exceptional with his rebounds both defensive and offensive and also contributed much-needed buckets for his team.

However, Gamage was playing as a one-man Army in scoring beyond the arc for team Sri Lanka. Sri Lanka showed signs of connecting shots at ease. Similarly, Tongan players were also not lucky enough to make their baskets which would have secured their win, the misses and the poor defense over the extra time turned the table towards Sri Lanka. The back-to-back two-pointers and offensive rebounds paved the path for their win in the first game in the qualifying round.

Sri Lanka played their second game of FIBA 3X3 ASIA CUP [qualifying level] against tall lads in red, China. Sri Lanka stepped into the game with a formidable start opening up the score sheets with their first bucket by Gamage. The young lad is a crowd-pleaser, who played professional 3×3 in an international arena. Chinese were not their selves in the very first few minutes of the match but soon recovered and emerged victorious with a double-digit margin. [21: 8]

It was indeed the height difference between the Chinese players and their keen eye for 2 points that booked their spot at the main games in the tournament. Rebounds, quick transitions, quick shots, and the physical power of the Chinese players were a great threat to Sri Lanka. However, Sri Lankans had their momentum in the very beginning. The lack of confidence to attack towards the rim and the defensive pressure put on the Chinese were questionable as the team had much experience in it.

Both teams went into team fouls by the 6th minute of the game and team China executed all the free throws with a nice swish. The gaps Lankans created in their defense were neatly filled by the Chinese. Sri Lanka indeed should work on their defense and quick shots more if they are to move forward in 3×3 basketball.

Pawan Gamage scored a sum of 15 points for Lankans. He is acknowledged as the top for Sri Lanka and he was listed among the top 15 scorers.

Victory is mere satisfaction, every downfall is a lesson for life. May this win bring satisfaction and the loss be a great lesson for Sri Lanka basketball.