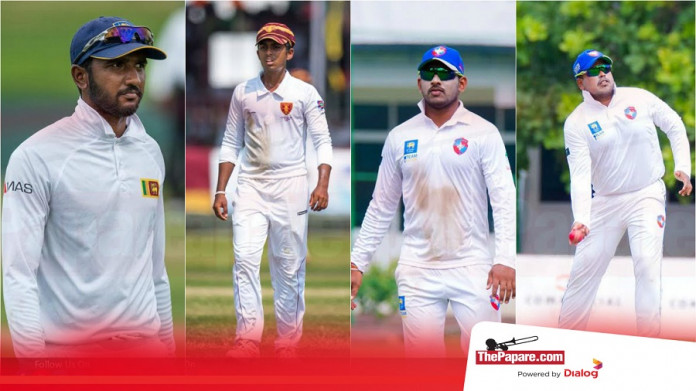 Tamil Union overcame Badureliya to win by 38 runs in a thrilling encounter at the P. Sara Oval while Leo Fransisco (103) Shehan Jayasuriya (168) and Sachithra Serasinghe (101) managed centuries for Army and Chilaw Marians.

The Tamil Union bowlers came out on top as they bowled the hosts to a 38 run win over Badureliya at the P. Sara Oval earlier today.

Earlier in the day the hosts added 17 runs to their overnight score as they declared on 239 for 9 in their second innings. Sithira Gimhan top scored in Tamil Union’s second innings with 86 while visiting captain Alankara Asanka managed 7 for 87.

Badureliya made the worst start possible in their chase of 362 as they fell to 6 for 116. Nimanda Madushanka stepped up to the chase and scored a magnificent 126 as he gave a glimpse of hope for Badureliya.

Madushanka’s 126 was all in vain as the visitors fell short by 38 runs to give Tamil Union an outright win.

Chilaw Marians, steered by Shehan Jayasuriya’s 168 and Sachithra Serasinghe 101, scored a mammoth 397 in just 84 overs of play on day 1.

Captain Mahela Udawatta scored 53 off 70 balls with 6 fours for Chilaw in their total.

Nipuna Madusanka was the pick of the bowlers for Galle picking up 2 for 55.

The game will continue for day two tomorrow at the FTZ grounds in Katunayake.

Thilina Thushara and Nilanka Pathirana bagged 3 wickets each to dismiss the hosts Burgher Recreation Club for 293 in the first innings.

Lasith Lakshan top scored with 63 while Hashen Ramanayake and Chanaka Wijesinghe made 53 and 52 respectively.

Day one ended with Moors on 47 for no loss.

The game will continue for day two tomorrow at the BRC grounds.

Colts CC lead by Angelo Jayasinghe’s unbeaten 103 made 321 for 8 in 90 overs on day one in ther game against Saracens SC.

Sadeera Samarawickrama was the second highest scorer with a quick 56 off just 53 balls.

Chathura Randunu picked up 5 for 78 but failed to restrict Colts.

The game will continue for day two tomorrow at the Colts Grounds.

Minod Bhanuka and Dhanushka Gunathilake were unfortunate to both fall in the nervous nineties but managed to take SSC to a commanding 382 in 90 overs for the loss of 8 wickets on day one of their game against Bloomfield.

The game will continue for day two tomorrow at SSC.

Leo Fransisco scored 103 as he along with Dushan Vimukthi (40) guided Army to a moderate 256 in 90 overs for the loss of 7 wickets.

Amila Aponso picked up 6 for 63 in 28 overs as he spun through the Army innings.

The game will continue for day two at the Army grounds in Panagoda.