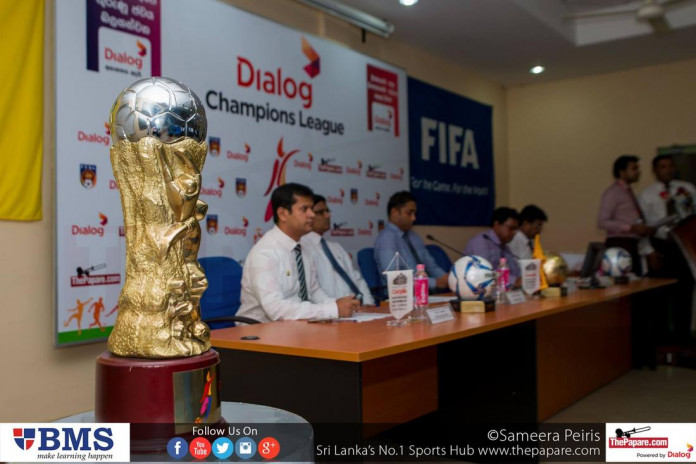 In a sensational turn of events the Football Federation of Sri Lanka (FFSL) found themselves in a quandary, after they had to postpone the start of the Super 8 stage of the Dialog Champions League 2016 with three days left for the grand opener.

The statement from the FFSL, which was released this evening (Wednesday 24th Aug) read;

“Please be informed that the scheduled Dialog Champions League Super 8s kick-off on 27th August 2016 is postponed due to unavoidable circumstances. We’ll update the latest schedule in due course.”

Rumours were aloft from the start of this week, as ThePapare.com learnt on Monday (22nd), that the Race Course Stadium staff were unaware of such an event happening on the weekend.

“We booked the venue and we planned according to that. However we got to know from the UDA (Urban Development Authority), which is in charge of the Stadium, this week that there was a miscommunication made when the FFSL booked the venue and it was already booked for another event on the same weekend,” the CEO of FFSL Jaswar Umar said, speaking exclusively to ThePapare.com.

This situation is compounded by the fact that FFSL held the Super 8 Press Conference amidst the media gathering last week and released the fixtures which clearly stated the first two weeks of the DCL – Super 8’s will be held at the Race Course International Stadium.

When asked as to how the future fixtures would be scheduled,

“We will be starting the Super 8’s next weekend, that’s the 3rd of September. However we are in a tight spot now, as we have the National Sports Festival and the Sri Lanka National team is going to Cambodia on tour. We initially planned to end the Super 8’s before that, but now it will get overlapped,” Jaswar added.

“We have two options, one is to squeeze in the fixtures to the already tight schedule, which is highly unlikely as we have to consider the well-being of the players, and the other is to have 3-4 game weeks, give a 2 week break for the tour and then continue after that. We’ll be taking a final decision on Friday,” he went on to say.

This unfortunately further disrupts the plans of the clubs who are participating in the Super 8’s, adding to the already tight and hectic scheduling of fixtures released last week.