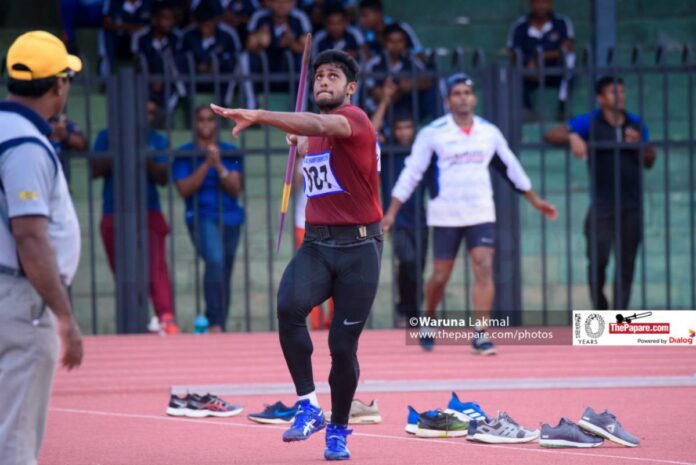 Ranasinghe’s best performance in the competition was recorded in his very first attempt as 74.55m. This competition was a World Athletics – Continental tour- Bronze Meet and the gold medal was won by Rolands Štrobinders from Latvia with a 78.72m throw which is a new Meet Record.

Since this is a Grade “C” competition, Ranasinghe will gain 45 valuable points for the 3rd place finish and a total of 1069 performance points for his best throw 74.55m which means he will be placed at 1125 average performance score in the ‘Road to Oregon’ rankings in the next Rankings update. He needs to be within top 32 places in the rankings to qualify for the World Athletics Championships 2022 which will be held in the USA from 15th -24th July. Currently, Ranasinghe is placed in 34th position.

Meanwhile 3 other athletes, namely Sarangi Silva, Kalinga Kumarage and Gayanthika Abeyratne who have also competed in this competition, couldn’t hang on to any medals yesterday.

National champion in Long Jump, Sarangi Silva produced a performance of 6.19m in the finals and was placed 4th in the competition. This performance won’t improve Silva’s Rankings in the ‘Road to Oregon’ list.

The 400m National Champion Kalinga Kumarage delivered a timing of 46.36s (6th place) in the final while Gayanthika Abeyratne, 800m national record holder, was also placed 6th with a timing of 2.04.48min.

This is the final competition for the 4 Sri Lankan athletes in their Europe tour.