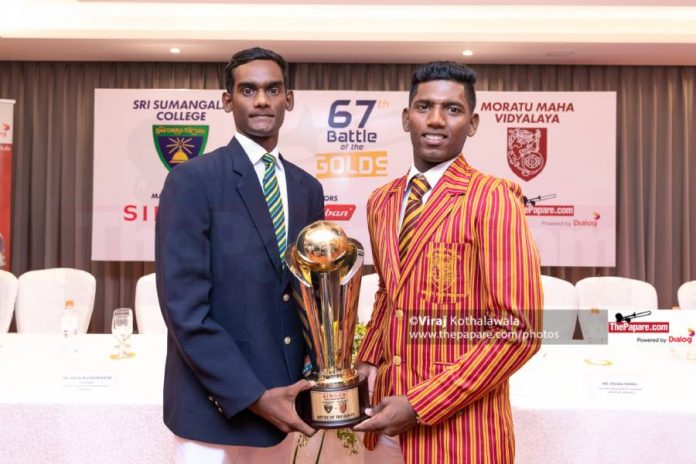 Two prestigious schools from either side of the Southern border of the Colombo District, Panadura Sri Sumangala College and Moratu Maha Vidyalaya will meet for the 67th time to decide the fate of “Singer Battle of the Golds” Cup at De Soysa Cricket Stadium, Moratuwa on the 22nd and 23rd March 2019 and the 27th One Day Encounter which will take place on 24th March 2019.

The press conference for this important clash which connects the Moratuwa-Panadura brotherhood was held on Tuesday, 5th of March headed by the Principles, Dimuthu Deranagoda of Sri Sumangala College and Hemasiri Ataudage of Moratu Maha Vidyalaya and former Sri Lankan Cricketer Ravin Wickramarathna along with the participation of Old boys, School Cricket teams and the Organizing committee at Mandarin Hotel, Colombo.

Looking at the history of this clash, the Sumangalians are leading the victory tally as they have won the encounter on 8 occasions to Moraliyans’ 7. Though this is only the 67th time these two schools meet each other in the big match, the first encounter between the two schools’ dates back to 1934.

The one-day encounters, which began 27 years ago in 1993, have resulted in 12 victories for Sumangalians, 11 for Moraliyans, 02 matches where no decision was taken, and a match not played in 2001.

“The history tells us we sit ahead of our opposition. But we can’t take them lightly whatsoever, they are a very skillful team. But we are prepared to play for the pride of our Sri Sumangala College and give a good fight”- Janindu said to ThePapare.com

Moratu Maha Vidayala will be led by the explosive wicketkeeper batsman Nishan Madushka who also represented the Sri Lanka U19 team last year.

“We want, as a team, to play well and win these two games to equal the record of victories between two schools. We have really good players to do it and I hope they will give their best”, Nishan said.

Apart from Wickramarathna, Ajantha Menids, Kaushal Silva, Tissa Illeperuma, Don Anurasiri, and Dilruwan Perera are few of the many cricketers who have gone onto shine at the biggest stage for Sri Lanka from these schools.

The one-day encounter will be telecasted LIVE on Dialog TV, live-streamed on ThePapare.com and on the Mobile TV streaming application MyTV.