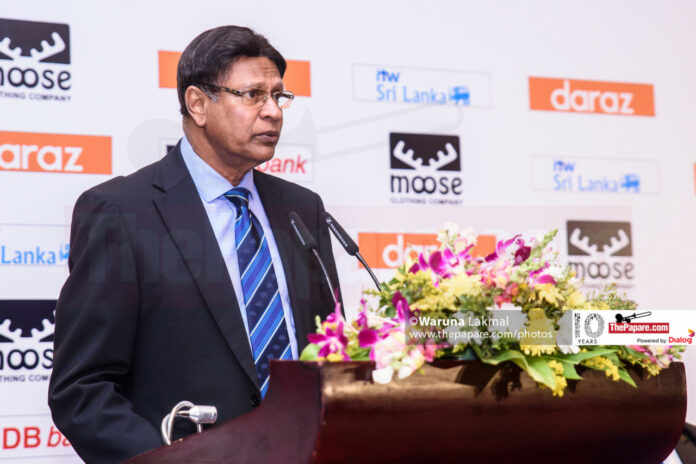 Sri Lanka Cricket Secretary, Mohan de Silva said that it is unfortunate that Sri Lanka would not be able to host the Asia Cup as scheduled this year, but nevertheless Sri Lanka was assured of the US $ 6 million that would have accrued to the country had the tournament been hosted here. “Sri Lanka will still receive the US $ 2.5 million hosting fee, 1.5 million ticket sale fees and 2 million fee due to every participating team.

Flanked by the SLC Chief Executive Officer, Ashley de Silva, the SLC Secretary addressing at the Sri Lanka Cricket headquarters yesterday, said that it was unfortunate that Sri Lanka missed the hosting rights of the mega T20 Asia Cup. “But this was solely because the stakeholders doubts due to the prevailing unrest in the country. Had we hosted it Sri Lanka’s economy would have definitely been boosted centred around a tourism build up and upped the country image,” he said.

While observing that the recent Australian home series was a great success which had much to do with the media publicity SLC gained, the SLC Secretary went on to emphasise the point that the SLC President, Shammi Silva had in fact done everything possible along with the sports minister to have the Asia Cup in Sri Lanka, but the snag was the uncertainty among the stakeholders.

Meanwhile, SLC Chief Executive Officer, Ashley de Silva said that the SLC hierarchy would hold viable discussions with the Asian Cricket Council and ICC in Dubai during the staging of the Asia Cup. “Our discussions would centre on this year’s T20 World Cup and next year’s Cricket World Cup,” he said. The coming year would be gainful with the tight home schedule of India, Ireland and Afghanistan playing Sri Lanka. He underlined far reaching plans that would benefit women’s cricket in the country.

Ashley de Silva spelled out big plans to boost women’s cricket. It envisaged a 45-member national pool contracting the players. A leap forward would be the accent on a long term U19 national pool while women’s cricket would also benefit by the use of the P. Sara Stadium for practices where players would be benefited by use of the centre wicket, a facility that they lacked hitherto.