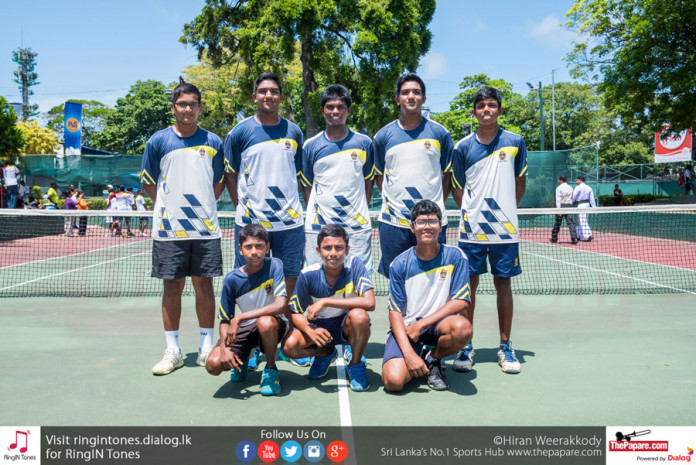 St. Peter’s College made their return to the tennis arena in style as they drubbed defending champions Ananda College in the finals to win back the Under 17 All Island Tennis title at the Sri Lanka Tennis Association courts a short while ago.

The All Island Under 17 Tennis Championship is Sri Lanka’s age-group school tennis tournament that is played in the form of a team event. Teams are initially divided into groups where they play each other in round-robin form and later the semifinalists are shortlisted.

It was Ananda College and St. Peter’s College who made their way from the semi-finals to the last draw that would decide the victor of the under 17 title. Coincidentally it was the same two schools that came to the finals last year and it was Ananda who had the better hand winning the title.

It was a close tie as it could have gone either way with each team winning 2 matches each leading to the nail-biting final singles match to determine the winner.

Dushan Wijethunga of Ananda College lost the first singles to Peterite Skipper Thevindu Piyadigama losing both sets 6-2 and 6-1 giving the Peterites the edge at the start of the day.

The tables turned when the first doubles between Deelaka Ranasinghe & Vinuja Wijebandara from Ananda College and the Peterite pair Raveen Abeygunarathne and Shehan Perera Peters was won by Ananda (6-2, 6-2) equaling the points between the teams.

The second singles went in favour of St. Peter’s College as Randev Senevirathna of Ananda lost to Nenuka Jayathilake (6-0, 6-0). Both teams were equally matched making it a thrilling game.

The Anandians had hope once again as Anjana Sameera and Ravindu Palliyaguru from Ananda College received a walk over from Naveen Abeygunarathne and Numaidh Othman from St. Peter’s College. This once again brought the two teams to equal footing and the pressure was on the third and final singles players as the game would decide the winner of the tournament.

The third singles encounter was played between Ashen Silva from St. Peter’s and Sethum Kumarasiri from Ananda College. Ashen overcame Sethum as the Peterites won the final match (6-0, 6-0) and took home the title of the all island under 17 tennis tournament.

The captain of the winning team Thevindu Piyadigama had this to say to the ThePapare: “We became runners up last year and came into the tournament this year confident that we can win. The whole team showed a lot of commitment throughout as they all worked hard with the goal to become the champions and I’m glad that all the work wasn’t in vain.”

With the under 17 boys championship going back to St. Peter’s, it marks the end of the first leg of school tennis action as the exciting under 19 contest will resume in September this year.