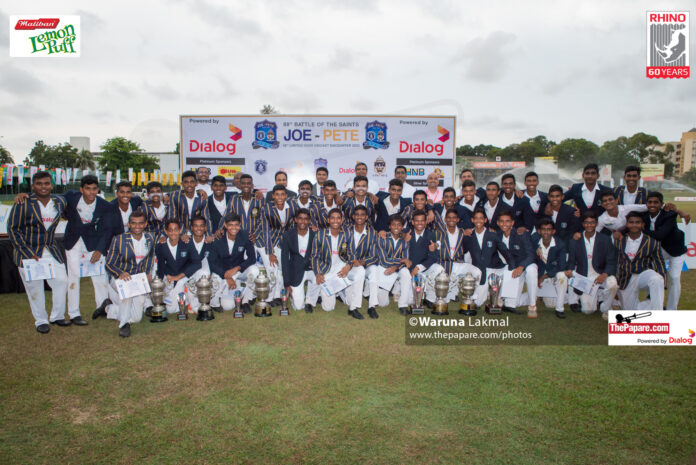 Sadeesh Jayawardane scored an unbeaten hundred to save St. Joseph’s College from the jaws of defeat as they held on to draw at the 88th Battle of the Saints played at P Sara Oval.

With a lead of 123, the Peterites resumed their innings on Day 2. Despite having the advantage, St. Peter’s College took a cautious start to their innings. The Jospehians started off the day by getting the wicket of Shenal Boteju.

Abilash Wellalage, who came in as the night-watchman, was joined by Lahiru Dawatage, and the pair added 94 runs for the 4th wicket. Wellalage top-scored with 61, while Dawatage scored his third half-century in the big match series.

The Peterites stepped on the gas after the lunch break and managed to stretch their lead to 320 before declaration.

The Josephians had approximately 60 overs to bat out or chase down the total. Their start was not ideal, when Naren Muralitharan was caught behind off Hemananda. Matters got worse for them in the fifth over, when Shevon Daniel turned blindly for the second run and was left stranded in the same end as Jayawardane.

The Peterites found the opening and they struck once more with the wicket of Muditha Lakshan. However, Dunith Wellalage and Jayawardane survived until tea.

A few overs after the break, Dunith Wellalage was caught behind to the bowling of Niman Umesh, who got the double over him in the match. The Peterites went on to take the wicket of Mithira Thenura to have the Josephians in a spot of bother at 112 for 5, with 20 overs remaining in the day.

Despite the best efforts from the Peterite spinners, Jayawardane remained rock-solid in the crease. He found good support in Hiran Jayasundara – the pair remained unscathed until the very end while Jayawardane reached a match-saving century for the Josephians.