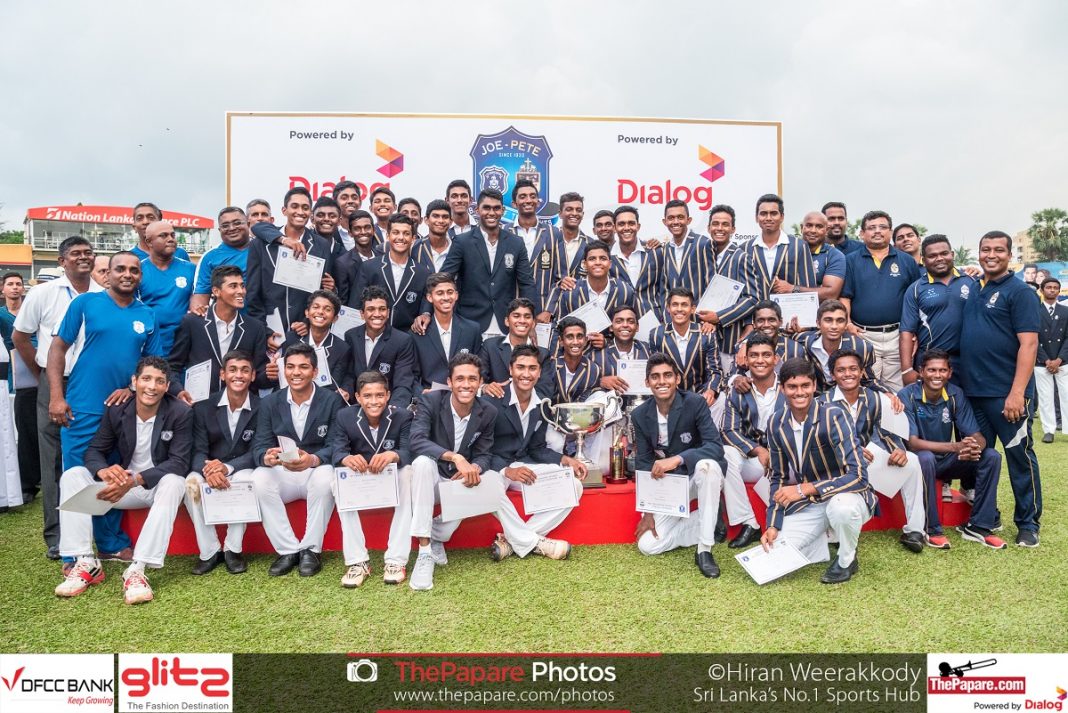 The 84th Battle of the Saints ended in a draw as St. Peter’s College took major honours in their annual cricket encounter against St. Joseph’s College at P. Sara Oval Grounds, Colombo on Saturday.

A rearguard 8th wicket stand of 80 runs between Dineth Jayakody and Dunith Wellalage helped St. Joseph’s College reach 237 for 8 in their 2nd innings and earn a honourable draw.

Earlier in the game St. Peter’s College took an important 49-run lead in their 1st innings as they commenced day two on 190 for 6 with 11 of their 60 overs left. The Peterites comfortably collected runs as the Josephians bowled negatively in the first hour of play.

Seamer Lakshan Gamage went on to pick up 4 wickets but some lusty blows by the lower order batsmen pushed the Peterite first innings score to 244 from their allotted 60 overs.

The Josephians were under pressure from the onset in their second essay as they lost experienced opening batsman Revan Kelly early on.

Nipun Sumanasinghe and Johanne De Zilva made 35 and 33 respectively to defy the Peterite bowling but some irresponsible batting had the Josephians reeling at 146/7 with more than 35 overs left in the game.

Jayakody and Wellalage batted for more than 20 overs and constructed a match-saving 80-run stand as St. Joseph’s built a substantial lead to bat St. Peter’s College out of the game.

Right-handed Jayakody used up 130 balls for his unbeaten 55 which had 5 fours and a six while 15-year old Wellalage made 44 off 78 deliveries with 7 fours.

The Peterites off-spinner Ruvin Senevirathne who didn’t bowl a single over in the first innings, picked up 4 for 50 as St. Joseph’s batted for 83 overs and declared the innings setting an impossible target of 189 runs for the Peterites in the final hour.

The lads from Bambalapitiya ended the match on 57 for 1 in 9.2 overs before the teams settled for a draw.

On day one, after being asked to bat first, Daniel played a lone hand for the Josephians with a fine 93 off 125 deliveries as they were bowled out for just 195 runs.