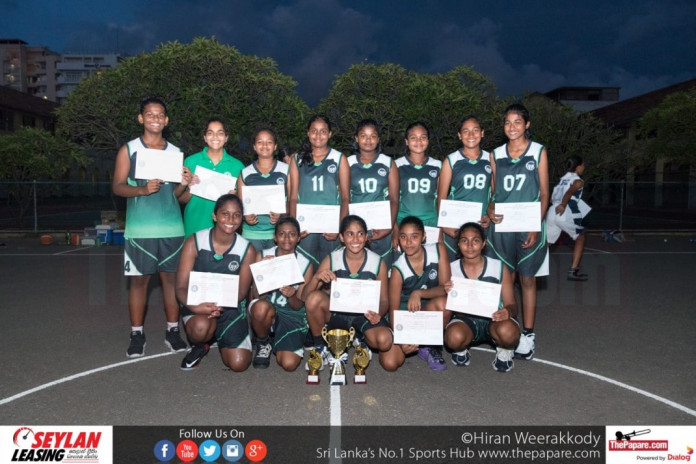 This game was re-match with there being a lot of controversy about the previous encounter which was  played on the 30th of October.  In that game with just 3 minutes remaining and St. Bridget’s leading  by 12 points, the game was called off due to bad light.

After much discussion and debate the teams decided to play the game after 4 days.

On match day there was a sense the anticipation in the air as everyone was expecting a one sided game after the end result of the previous game. However, 4 days was enough for the HFC camp to do their homework on the opposition as they made life difficult for the Bridgetians with both sides opting to make shots from the perimeter in the first quarter. With just 1 minute remaining in the first quarter SBC was able to score 4 points in quick succession.

At the beginning of the 2nd quarter both teams decided to stick to the same game plan and try and make shots from the perimeter but to no avail. Midway through the 2nd quarter the pace of the game started increasing as HFC and SBC decided that the game of shots was no fun and decided to start driving into the basket. HFC was able to draw in the fouls, unfortunately they were not able to capitalize on the free throws. Meanwhile SBC was chipping ahead as they scored 4 more points in the quarter to HFC’s 3 points.

The beginning of the 3rd quarter saw a much different HFC side come out to play as they defended for honour and glory denying easy shots for the Bridgetians and forcing the errors while scoring from the other end. The Bridgetians knew they were losing control of the game as they only scored 3 points in the quarter while the Familians scored 8 points to level the scores at the end of the 3rd quarter.

With just 10 minutes remaining and the scores on level, both teams had everything to play for in this final game. Initially it was just both teams poking at the opposition’s defence trying to find an open spot. As the game came closer to the climax, tension was rising as the referee had to stop the game briefly to have a word with the coaches. With the score level at 15 all with a minute remaining the Bridgetians were able to score 4 points and the Familians were able to reply with just 2 points. With the final whistle there was much jubilation as it drew end to a closely contested final between the two co-host of the tournament.