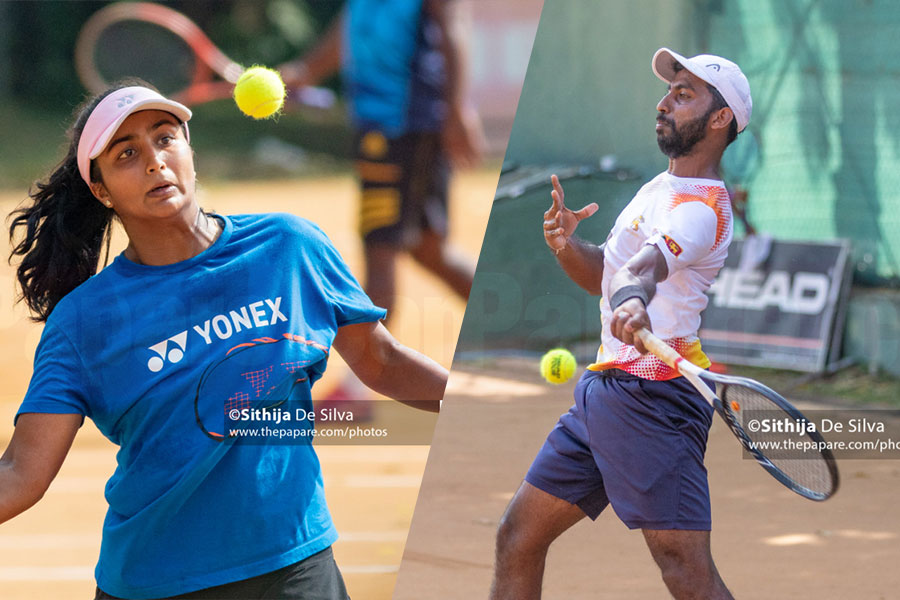 Over 600 entries showed up this year, making the event a highly competitive one, with most national rankers in the mix defending their titles. However, defending Men’s champion Sharmal Dissanayake opted out of the tournament this time, making way for last year’s runner-up Yasitha De Silva for a shot at redemption.

De Silva, mixed in with a draw of 64, made his way to the final starting in the middle of the draw as the 5th seed. After receiving a Bye in the first round, he faced veteran Michael Siyaguna who retired after being down 4 games to 1 in the first set.

Next in the trail was Jagath Gamage who gave away an easy win to De Silva with a scoreline of 6,1 / 6,1. De Silva met 4th seed Luca Knese in the Quarterfinal stage who he overcame in straight sets, 7,5/6,3. Fast rising talent, Dhilvan Herath was up next in the semifinals, but was no match for De Silva who advanced to the final with a score of 6,4/6,2.

From the bottom half of the draw, unseeded Savit Weerasinghe was wreaking havoc against some seeded entries. His first victim was R Ratnasingham with a score of 6,0 /6,1. 11th seeded Ruwan Fernando went down in the second round 7,5 / 6,2.

Next was Weerasinghe’s toughest opposition in the draw, 2nd seed Chathurya Nilaweera. Weerasinghe wasted no time in advancing to the semifinal with a thrashing of 6,1 / 6,0. Thehan Wijemanne, seeded 6th this time, gave a good run in the semifinals but to no avail as Weerasinghe swooshed past 7,6(6) / 6,2.

The final match was De Silva’s ticket to stealing the title he lost last year, and he did so in style 6,2 / 6,4.

In a 16-member draw, Neyara Weerawansa started off unseeded to steal the show in the end. Dahanma Methsandi was her first prey through a simple two-setter 6,1 / 6,0.

Weerawansa created a major upset in the Quarterfinal, defeating 3rd seed Savini Jayasuriya in three sets, 2,6 / 6,2 / 6,0. After this win things got easier for Weerawansa as she met Dewmini Warnasuriya in the semis and gained a 6,0 / 6,1 win to advance to the finals.

13-year old Heshani Imanga reached her first ever Women’s final in a major tournament. 2nd seed Janali Manamperi went down in straight sets, 6,3 / 6,3, rather shockingly in the very first round. P Chandramohan stood no chance against Heshani as she cruised past 6,2 / 6,2.

Defeating Tuvini De Silva in the Semifinal 6,4 / 6,3, Heshani Imanga booked her slot in the final from the bottom half of the draw. Anjalika Kurera opted out of the competition after entering the draw as top seed, citing injury.

The final was a keenly contested affair with both girls hungry for their maiden titles. Heshani Imanga struck first with a 6,4-set win in the first. Weerawansa bounced right back to take the second set 6,3. Neither was willing to let this match slip as the third and deciding set dragged into a tie-breaker. In the end, Weerawansa came out victorious with a tie-break score of 7-4. Final scores read 4,6 / 6,3 / 7,6(4).