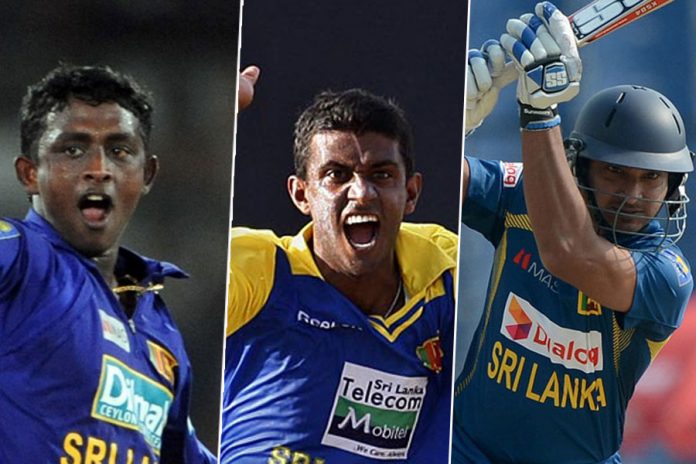 The second most successful team in Asia Cups, winning 5 titles, Sri Lanka has dominated the batting and bowling charts of the competition that was first held in 1984.

From 1986 to 2008 Sri Lanka featured in 9 consecutive Asia Cup finals, winning 4 of them. After missing out on the finals in 2012 they once again featured in an Asia Cup final in 2014, which they went on to win.

Since winning the first ever Asia Cup match to be played, beating Pakistan by 5 wickets in Sharjah, Sri Lanka have gone through some wonderful moments throughout the years. Reaching the finals 10 times in 13 editions is no mean feat. 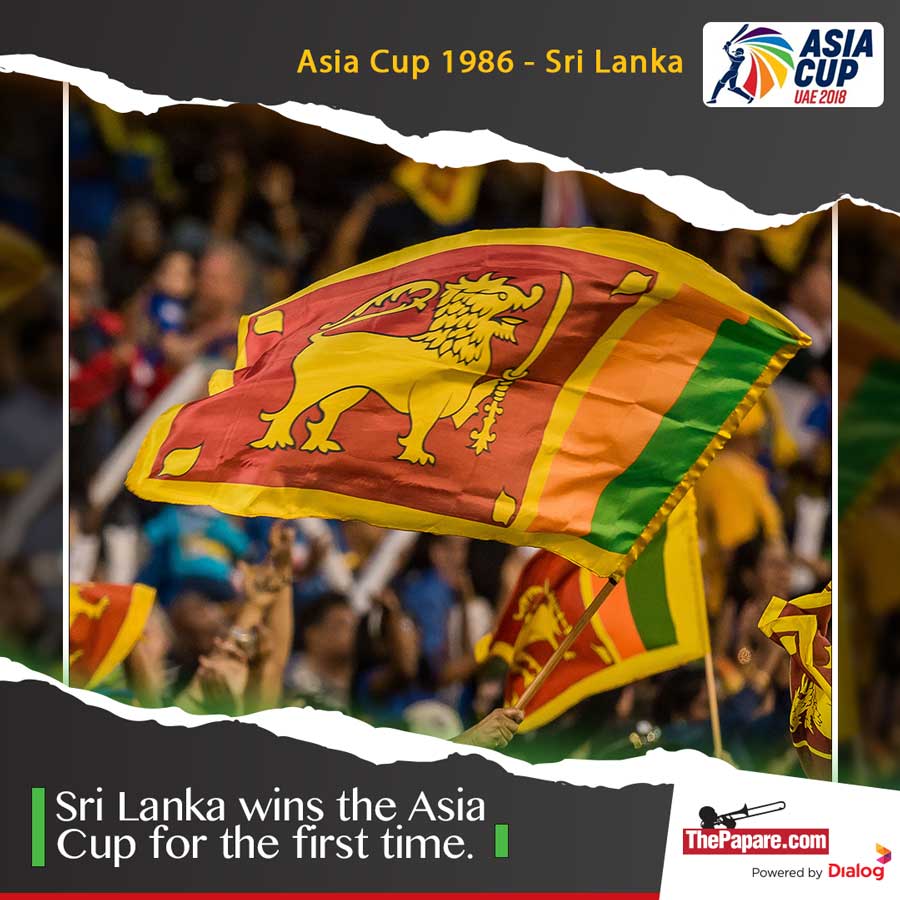 The 6th of April in 1986 is undoubtedly an unforgettable day for all Sri Lankan Cricket freaks as Sri Lanka, under the great Duleep Mendis’ leadership, clinched their first ever major title in International cricket. The then President of Sri Lanka Mr. J. R. Jayawardene even had to declare the following day a public holiday to commemorate the victory in response to the requests of the large crowd. Such was the importance of the victory for the Sri Lankan masses.

The 1986 Asia Cup was the 2nd Asia Cup to happen and Sri Lanka were the hosts. Defending champions, India controversially withdrew from the tournament due to the political turmoil which prevailed in the island. Bangladesh participated in the tournament for the first time to make it a 3-team competition.

Sri Lanka, who lost to Pakistan in their first match made it to the final after beating Bangladesh convincingly. Sri Lanka started the all-important final, which was played at the SSC Grounds in Colombo, strongly, taking 5 Pakistani wickets for just 72 runs in 26 overs, but they failed to stop Javed Miandad who scored a chanceless 67 facing 100 balls to help Pakistan reach 191. In fact Pakistan accumulated 91 runs in the last 9 overs.

In the run-chase Sri Lanka were blessed with an injury to Pakistani skipper Imran Khan who otherwise would have been a threat to the Lankan batsmen with both his tactful leadership and smart bowling. Pakistan however managed to strike even after Sri Lanka made a steady start to leave Sri Lanka on 3 for 64. Then

it was the young Ranatunga – De Silva duo who stood up to rescue Sri Lanka as they put on a 97-run partnership for the 4th wicket in 16.1 overs. Ranatunga scored 57 while De Silva scored 52. Sri Lanka won the match by 5 wickets with 16 balls remaining. Arjuna Ranatunga was 22 and Aravinda de Silva was just 20 at that time. The service these two legends went on to do for Sri Lanka Cricket is something every Cricket fan would remember forever.

Ranatunga was also adjudged Man of the Series for scoring 105 runs in 3 matches with an impressive average of 52.50. An interesting fact about the final is that it was also considered to be part of a Triangular tournament conducted parallel to the Asia Cup featuring New Zealand. 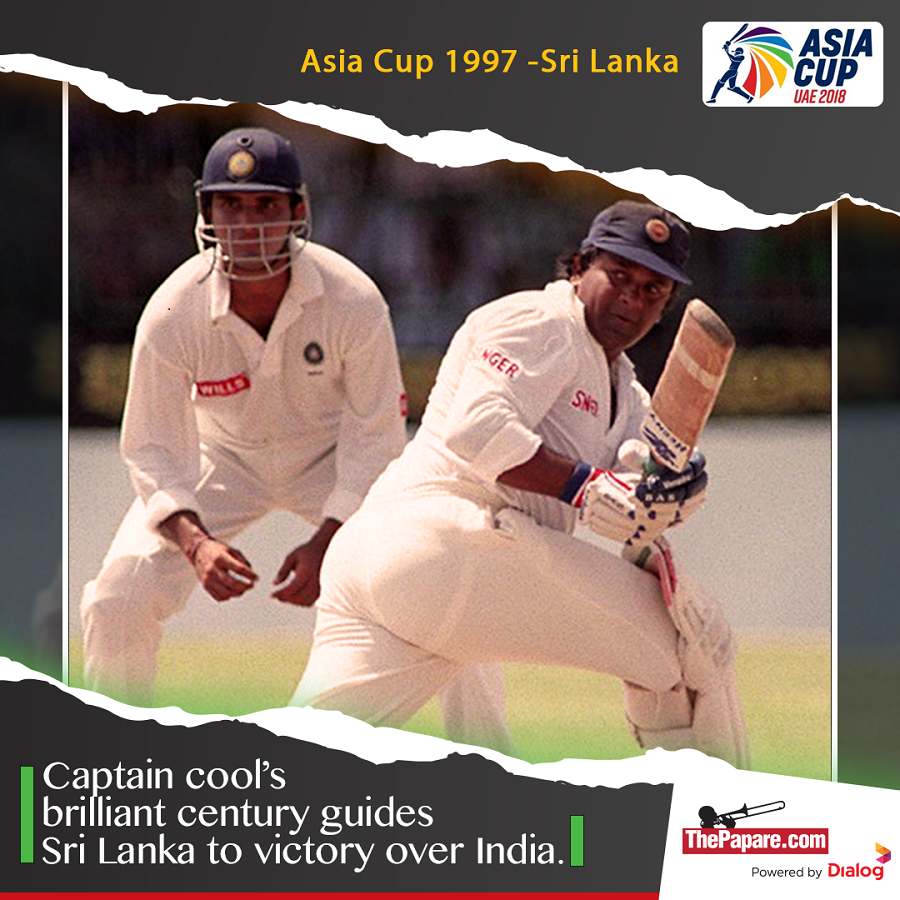 After Sri Lanka’s Asia Cup triumph in 1986 India went on to win 3 straight Asia Cups in 1988, 1990/91 and 1995 in Bangladesh, India and U.A.E respectively. Interestingly Sri Lanka led by ‘Captain Cool’, Arjuna Ranatunga were the runners-up in all 3 editions. After winning the World Cup in 1996 Sri Lanka began the 1997 Asia Cup as hot favourites. Living up to expectations Sri Lanka clinched the trophy, going unbeaten. 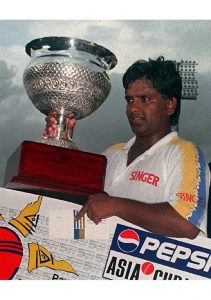 Sri Lanka met defending champions India in their second league match at the R. Premadasa International Stadium, after winning a thriller against Pakistan by 15 runs at the same venue. Sanath Jayasuriya’s brilliant bowling in the death helped Sri Lanka edge past Pakistan on that occasion. The match against India was also no different to the game against Pakistan. This time Sri Lanka were chasing. After India set a target of 228 Sri Lanka lost both Jayasuriya and De Silva for just 9 runs.

Captain Ranatunga, who then walked in, unfurled a blinder of an innings to take Sri Lanka over the line and secure a final berth. He was well supported by opener Atapattu (31) and Wicket keeper batsman Lanka de Silva (37*) who batted at 6. Ranatunga steered two valuable partnerships of 108 and 106* for the 3rd and 5th wickets respectively as Sri Lanka won the match by 6 wickets with 32 balls remaining.

Ranatunga’s excellent innings comprised of 17 boundaries. He in fact ended the tournament as the highest run-scorer with 272 runs in 4 matches with a mind-blowing average of 136 to be named the Man of the Series. 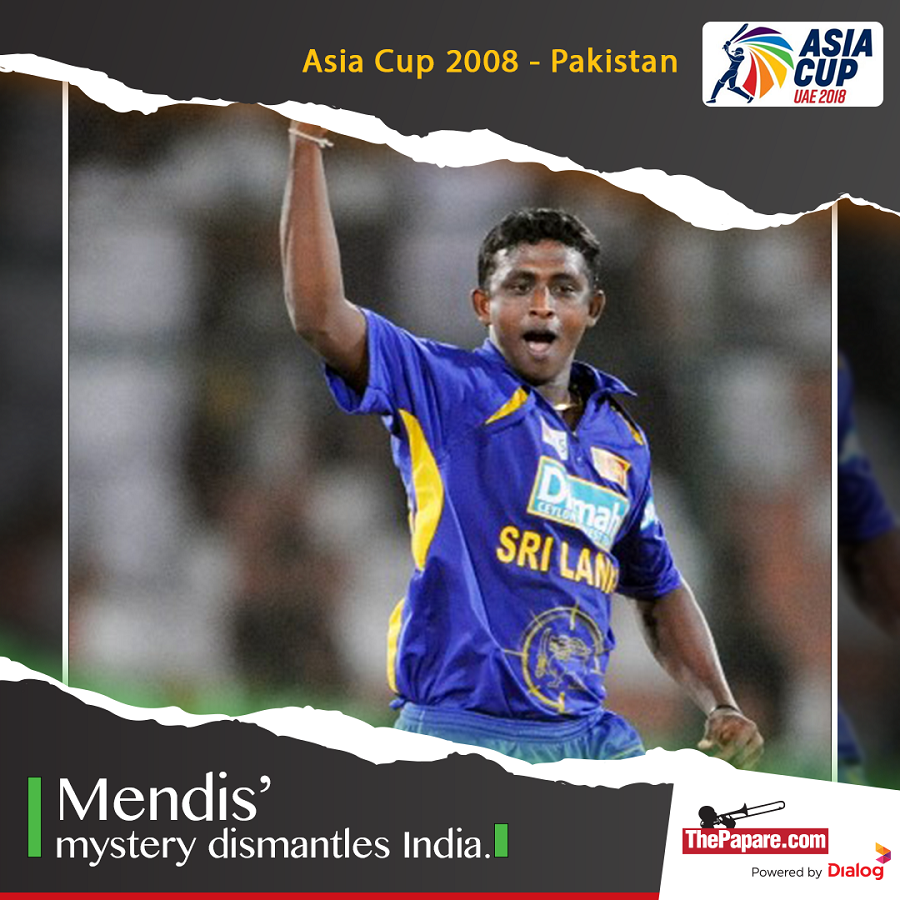 After the success in 1997, Sri Lanka lost the 2000 Asia Cup final handing Pakistan their first ever Asia Cup title. The next Asia Cup was hosted by Sri Lanka in 2004 which Sri Lanka went on to win, beating India in the final.

Sri Lanka began the 2008 Asia Cup as defending champions and also as runners-up of the 2007 World Cup. Led by the mastermind Mahela Jayawardena, Sri Lanka faced India in their last league match at the National Stadium in Karachi. Sri Lanka had already qualified for the final after winning all the previous matches by margins well over 50 runs. Batting first for the 5th time in 5 matches Sri Lanka posted their 4th 300-plus score in the tournament setting India a target of 309. The strong Indian batting line-up chased down the target losing just 4 wickets with 19 balls remaining. They in fact had chased down 300 against Pakistan in a previous game, in the same venue in the same tournament, with 47 balls remaining. Such was the form the Indian batsmen were in.

Sri Lanka went in to the final at the National Stadium in Karachi with 2 changes. One was the inclusion of Ajantha Mendis. This time inserted to bat unlike in the previous match Sri Lanka were bundled out for 273, their lowest total in the tournament. The 273 Sri Lanka scored was also largely thanks to a brilliant century by Sanath Jayasuriya who scored 125 runs.

Virender Sehwag gave India a flying start scoring 60 runs in just 36 balls with 12 fours. India were on 76/1 after 9 overs when Jayawardena introduced Mandis ahead of the experienced Muralitharan in to the attack. Sehwag showed intent to attack the first ball. Mendis dropped his 2nd ball short, expecting Sehwag to charge down the ground and Sangakkara had no trouble in completing the stumping. 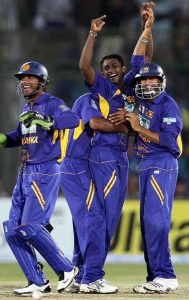 Yuvraj Singh who walked in next was the unlucky guy, he had to face the Magic ball, the carom ball which none of the Indian batsmen had faced before. It was only his second delivery, the ball released with a flick off Mendis’ middle finger fell on a good length and just rushed through Yuvraj’s defence to disturb the stumps. A few overs later Suresh Raina was also dismissed in an identical manner.

Mendis trapped Rohit Sharma right in front of middle stump off  the last over of his first spell which lasted 4 overs. He was handed the ball for his second spell in the 30th over with India struggling on 147/6 but still believing in their skipper M.S.Dhoni who was battling hard in the middle.

Mendis once again turned up his magic with 2 wickets in 2 balls in his 6th over as he dismissed Irfan Pathan and R.P. Singh. The hat-trick ball too saw a very close appeal by the Lankans which was unfortunately turned down by umpire Simon Tauffel. Mendis finished on 6/13, bowling 8 overs. Chaminda Vaas dismissed Dhoni few overs later and Nuwan Kulasekara castled Ishant Sharma to seal the title for Sri Lanka with a thumping 100-run victory.

Ajantha Mendis won both the Man-of-the-Match and Man-of-the-Series awards for his brilliant performances throughout the tournament. He topped the bowlers chart with 17 wickets in 5 matches.

4. Maharoof jolts India with a hat-trick 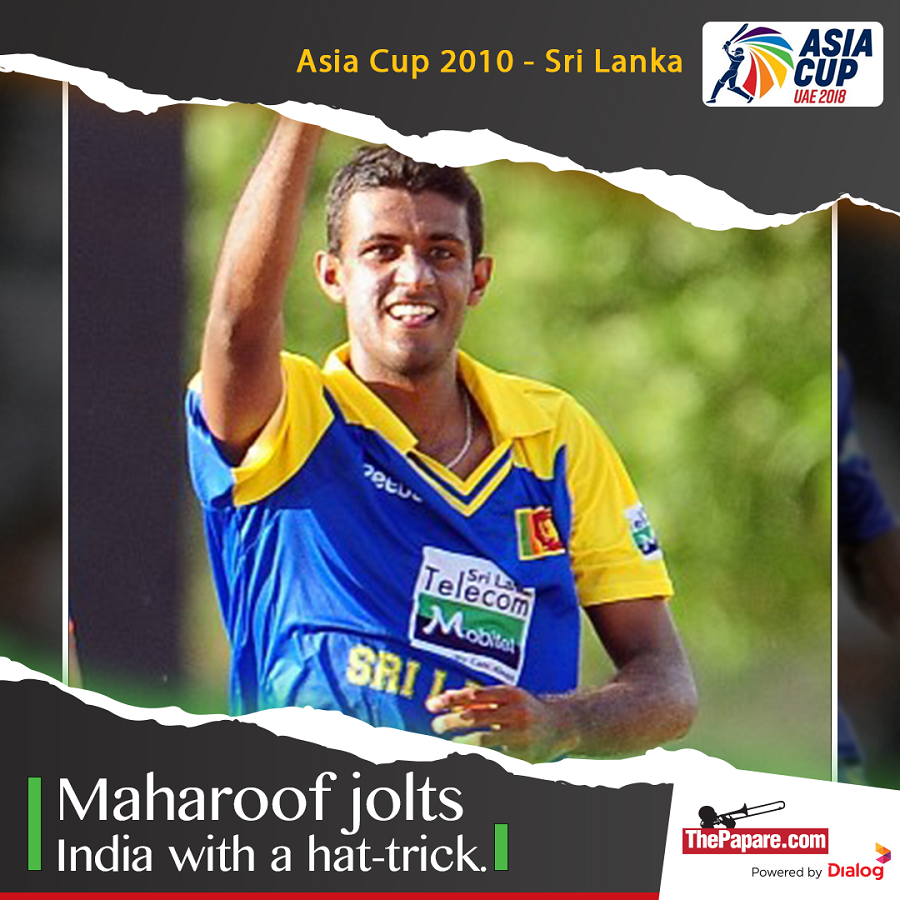 The next Asia Cup after Sri Lanka’s famous victory in Karachi was the 2010 edition in Sri Lanka. The tournament started in grand style with a thrilling encounter between Sri Lanka and Pakistan. Sri Lanka won the match by 16 runs eventually though Pakistani skipper Shahid Afridi scored a fighting century.

Farveez Maharoof who went wicket-less in that game was replaced by Chanaka Welagedara in the next match against Bangladesh. Sri Lanka, who beat Bangladesh quite easily rested Lasith Malinga and Nuwan Kulasekara for the last league match against India as they had already qualified for the finals. Farveez Maharoof took over the responsibility of bowling with the new ball in this game.

After putting India to bat Sri Lanka were desperate for some quick wickets as India were well set for a big score on 180/4 after 36 overs with two set batsmen in M.S.Dhoni and Rohit Sharma in the middle. Maharoof was handed the ball by skipper Kumar Sangakkara for his third spell when he had bowled 7 overs for 35 runs picking up Virat Kohli’s wicket.

With a young Ravindra Jadeja facing his first delivery in the next Maharoof over, he started off with perfect delivery to a new batsman. The ball was straight as an arrow and the left-hander played right across it to be adjudged LBW. Maharoof produced a perfect delivery to Praveen Kumar who came in at 8 to have him chopping on. 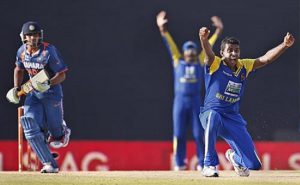 Zaheer Khan stepped in to face the hat-trick ball. Interestingly as everything was set for the hat-trick ball, the bails fell off the stumps due to the stiff breeze, leading former Pakistani cricketer Ramiz Raja, who was commentating at the time, to say, “It could be that the Sri Lankans are anticipating something big”.

As he anticipated, as Maharoof anticipated and as the whole nation anticipated, Zaheer Khan was OUT. It was once again a perfect seam-up delivery for a new batsman as Zaheer edged it to Sangakkara. The wicketkeeper made a full-length dive to complete Maharoof’s hat-trick. Maharoof also went on to take 5 wickets in the match and walk away with the Man-of-the-Match trophy.

5. Sangakkara’s masterpiece takes Sri Lanka over the line against India 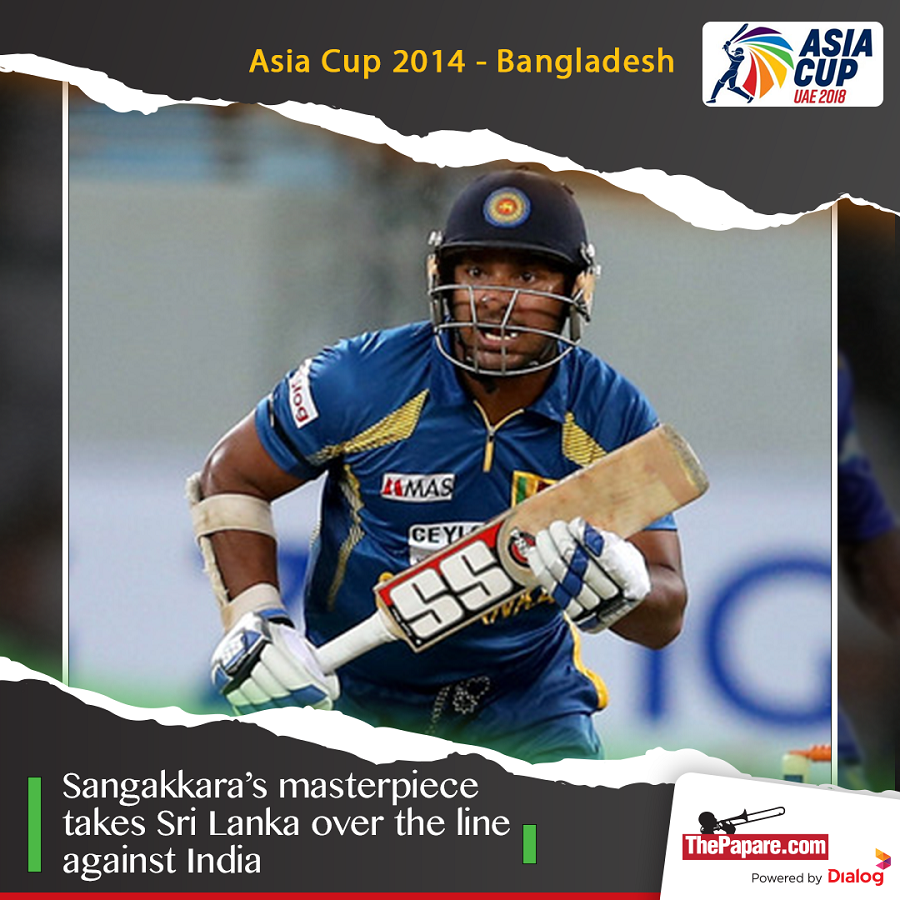 After the heart-break in the 2012 Asia Cup final in Dambulla, Sri Lanka had their worst ever Asia Cup in 2012. They lost every match in that tournament. After the disgrace in 2012 Sri Lanka came into the 2014 Asia Cup with a young captain in Angelo Mathews and so many youngsters in the squad. Contrastingly to the 2012 Asia Cup Sri Lanka won all matches in 2014 and emerged champions.

Out of all the wins in this tournament the win against India at the Khan Shaheb Osman Ali Stadium in Fatullah stands out solely because of a masterpiece by a great player, Kumar Sangakkara. 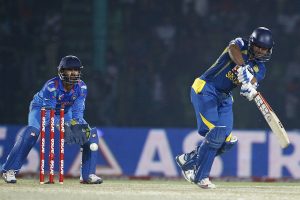 Chasing a target of 265, openers Lahiru Thirimanne and Kusal Perera gave Sri Lanka a perfect start, scoring 80 runs for the first wicket. Coming in at his usual position No. 3, Sangakkara was able to start slowly as Kusal Perera at the other end was batting nicely. With his wicket, when Sangakkara was on 27, Sri Lanka started losing wickets at regular intervals. Both Mahela Jayawardena and Dinesh Chandimal were dismissed in the same over by Ravindra Jadeja. Through all this Sangakkara stood firm at the other end accumulating runs and slowly inching towards the required target.

During the cause Sangakkara managed to help young Chathuranga de Silva and Thisara Perera hang around to put on valuable 32 and 42 run partnerships for the 7th and 8th wickets respectively. Sangakkara who recorded his 18th ODI ton in this match and single handedly won the match for Sri Lanka. Although he was dismissed in the 49th over, Sri Lanka were almost over the line thanks to his 83-ball century. Thisara Perera and Ajantha Mendis then made sure that Sanga’s effort didn’t go in vain as they put the final touches to a famous Sri Lankan win against India by 2 wickets with 4 balls remaining.