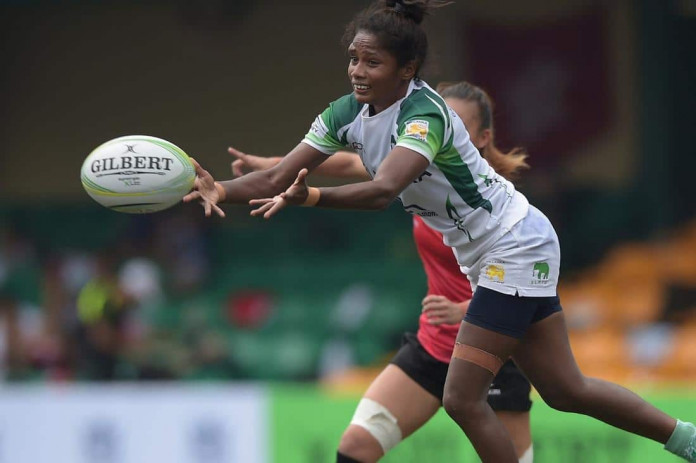 The Sri Lanka women’s 7s team finished 6th, in the first leg of the Asian Rugby 7s Series worked off in Hong Kong, going down to Singapore by 10 points to 7 in a closely contested “plate” final.

Despite the loss there were many positives to be taken from the overall performance in contrast to last year where they ended up losing all their games. Credit should be given to the coaching staff headed by the former Sri Lanka 7s legend Sudath Sampath, who would be looking to build on the performance for the next leg.

The Ladies were to face Guam who stood in their way to reach the plate finals. Sri Lanka dominated from the outset and scored early in the 2nd minute through Dulani Palikondage who out paced her opponent, running around to score under the posts which was converted to give her team the early lead. Sri lanka dominated possession and territory but couldn’t score again until the dying moments of the 1st half when Ayesha Perera dummied her way through to score a try which went unconverted.

The ladies made sure that Guam were given no momentum scoring once again after the restart when Dulani Palikondage managed to get her name on the score sheet in the 8th minute. A few minutes later the game was sealed when Air force Winger Anusha Attanayake scampered through for a try. Both tries were converted to give Sri Lanka a relatively easy win and a place in the “Plate” finals

The Sri Lankan ladies were determined to finish off the tournament on a high winning the Plate but they had to overcome the Singaporeans who stood in their way. Sri lanka started off brightly scoring early in the 1st minute through Dulani Palikondage who burnt her opposing number with her sheer speed. The try was converted by Dulani herself and Sri Lanka led 7nil.
Singapore despite not being the fastest team around utilized their weight and played basic rugby and most importantly secured possesion to build up phases. Sri lanka”s weakness was apparant in this aspect of the game as they seemed not prepared on how to defend such situations. Singapore playing the territorial game reduced the deficit to 2 points through Alvina Xiu who scored a well deserved try.

Noticing Sri Lankas weakness around the rucks and fringes the Singaporeans decided to keep possession close to the rucks and played somewhat a fifteens style pattern during the 2nd half. The ploy however started to bear fruit as the Sri Lankans kept giving away penalties as they tried to regain possession and get out of jail. Singapore then went on to score another unconverted try to take the lead for the first time. (SL 07 – SIN 10).
Tiring and somewhat confused, the Sri Lankans never recovered and lost the plot for the remainder of the game. Singapore to their credit organized their defense accordingly and always kept the dangerous Dulani in check realizing that she was the speedster to look out for. Pinned to their own 22 the Sri Lankan ladies struggled to break through and the score remained unchanged as the Singapore ladies ran away with a deserving win.