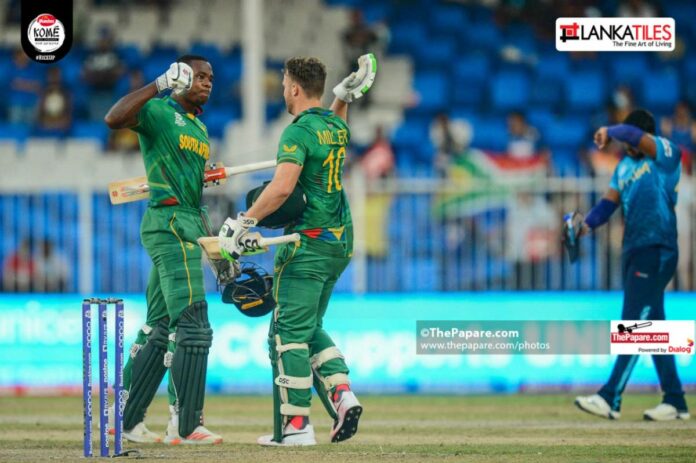 A heart-breaking loss against South Africa now means Sri Lanka will have to get a bit lucky to move through to the semi-finals. Here are some of the key talking points from the game against the Proteas. 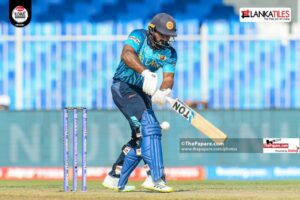 When facing a bowling line-up with the likes of Kagiso Rabada, Anrich Nortje, Tabraiz Shamsi and Keshav Maharaj in its ranks, it’s a no-brainer that as a batter, you will need to find a bowler to target. South Africa handed Sri Lanka an opportunity on a platter, throwing the ball to Aiden Markram for the 1st over. The Sri Lankan openers were overly cautious early on, particularly against Markram, who no doubt is a decent part-time off-spinner but should never have been allowed to get away with bowling 2 overs for just 8 runs in the powerplay.

Despite not even being a part of Sri Lanka’s playing XI at the beginning of the tournament, Charith Asalanka has pretty much been Sri Lanka’s best batter at the World Cup. And he’s done this by re-inventing himself in some ways to be a more aggressive batter, particularly clever against favourable match-ups. He looked good for another important innings, taking a liking to Keshav Maharaj’s bowling, but a slip at the non-striker’s end while turning for two and a brilliant throw from Rabada from the deep, ended a promising knock. Asalanka’s dismissal knocked the wind out of Sri Lanka’s sails just as he and Pathum Nissanka were getting going. Sri Lanka managed just 31 in the next 5 overs, losing a further 3 wickets, and there was no coming back from that. 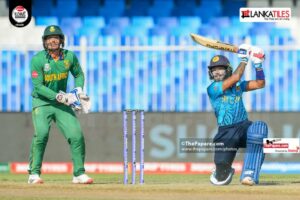 Prior to this tournament, neither Asalanka nor Nissanka were seen as good options for T20I cricket. Although he was slow to get going, Nissanka had one of his better days with the bat, while wickets fell at the other end. His 72 came off 58 deliveries, but what was most impressive was the fact that he was always looking for the boundaries. His attacking intent meant that he was able to give Sri Lanka something to work with – the highlight of his knock being the 17 runs he took off Rabada in the 18th over. 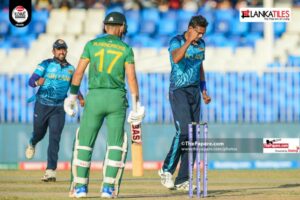 Dushmantha Chameera has had a quiet World Cup so far. But with Sri Lanka defending just 142 today, he really put his hand up early on in the South African chase. The quick bowled with pace, but more importantly got his lines right today, trapping Reeza Henricks in front in his 2nd over. A couple of deliveries later, he got the all-important wicket of Quinton de Kock, dragging Sri Lanka into the game. The two wickets put the Proteas under considerable pressure, forcing them to try and rebuild, this in turn allowed Sri Lanka to continue to pile on the pressure. 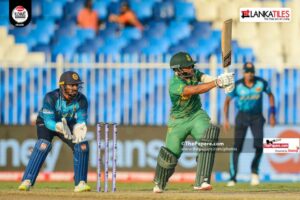 South African skipper Temba Bavuma moved himself down the order to accommodate Reeza Hendricks, who had done well in their last against the West Indies, at the the top of the order. Bavuma struggled to time the ball early in his innings and knicked one to Kusal Perera behind the stumps. Perera just about reached the ball, stretching forward, yet could not hold on. The umpire called it a wide, but Sri Lanka would likely have gone for a review if Perera had held on, but he didn’t, dropping another easy catch behind the stumps. The drop however, may, in some ways, have proved to be a blessing in disguise. Bavuma continued to struggle and ended up with 46 off 46. Though many would praise him for playing the ‘anchor’ role, Sri Lanka probably loved having him at the crease, as his inability to find the boundaries helped them push the required rate up. 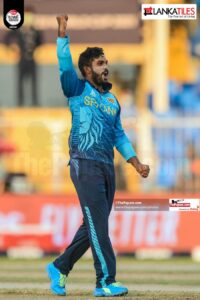 Wanindu Hasaranga has been a revelation in the last couple of years and today, when Sri Lanka got just 142, you just knew, he had to do something special if Sri Lanka were to win. Right on cue the man produced another clutch spell of bowling and to cap it off he picked up a hattrick – the key wicket of the in-form Aiden Markram with the last delivery of his 3rd over and Bavuma and Dwaine Pretorius off the 1st and 2nd deliveries of his 4 over. He nearly did a Malinga and had Rabada LBW next ball too. Crucially, he managed to keep his spell down to just 20 runs, despite being asked to bowl during the latter part of the innings, when the Proteas were looking for some big hits. 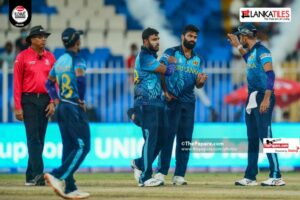 With 4 overs left to go and South Africa needing 41 to win, Shanaka decided he would use his best death bowler, Chameera for the 17th and 19th over and then Kumara and Hasaranga for the remainder. Chameera conceded 10 off the 17th and the ball went to Kumara for the next over. However, after a brief chat with a few players, Shanaka decided to give Hasaranga the 18th. 2 wickets and 6 runs later, it seemed like a good choice. Chameera was doing alright in the 19th before missing his length and being hit for 6 by Rabada – the 19th went for 10, leaving Kumara to defend 15 off the last.

With the short boundaries on the off-side, Kumara’s ploy seemed to be to bowl good length at David Miller’s body. However, this perhaps did not account for the fact that Miller’s main hitting ploy is to clear his front leg and hit over cow corner. Kumara’s 1st two deliveries fell right into his hitting arc and voila, 14 from 5, turned into 2 from 3 and eventually the Proteas won with a ball to spare.

Whether Kumara was the right choice to bowl that over was debatable, but considering that Sri Lanka don’t really have anyone defined for that role at the death and the fact that Kumara had bowled so well until then (Shanaka also mentioned he’s been nailing his Yorkers in training), meant that he was the most suitable option at the time.