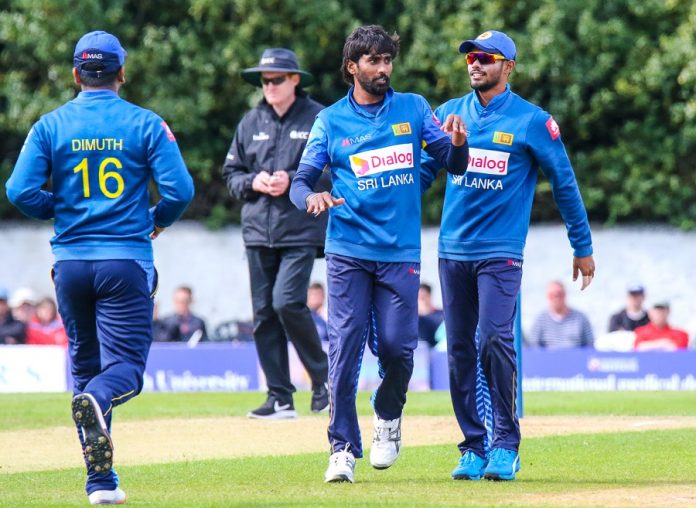 Sri Lanka will head into the ICC Cricket World Cup with a solitary victory behind them this year after they managed to beat Scotland by 35 runs (D/L system) in the rain-hampered second ODI match at the Grange Cricket Club in Edinburgh on Tuesday.

After a solid batting performance inspired by their new skipper Dimuth Karunaratne and their young top order, the Sri Lankan bowlers led by Nuwan Pradeep maintained their discipline and held their nerve to restrict the Scots.

Pradeep was in sublime form in his comeback game after recovering from an injury to end with 4 for 34 bringing to a close Sri Lanka’s eight-match losing streak in ODIs this year. He picked up two wickets on either side of the rain break to dent Scotland’s chase.

The hosts were 132 for 3 in 27 overs when rains arrived for the second time in the series with the visitors ahead by 29 runs according to the D/L method. After the skies cleared, the game got underway at 7.00pm (local time) with a revised target of 235 runs off 35 overs.

Hard-hitting George Munsey along with opening batsman Matthew Cross looked menacing as they gunned for the required 103 runs off 7 overs. Munsey was in brilliant hitting form as he struck the ball fiercely, smashing six fours and three sixes, giving Sri Lanka plenty to think about.

But Pradeep and Suranga Lakmal, who spearheaded the bowling attack in Malinga’s absence, combined well for the visitors to put an end to the Scottish threat.

In the first part of Scotland’s chase, skipper Kyle Coetzer and Cross started off steadily, adding 51 for the first wicket before the latter was bounced out for 34.

In his very next over, Pradeep castled Scotland’s best batsman Calum MacLeod with a peach of a delivery which jagged back off the seam to take the top of middle stump.

With this win, following the wash-out in the first match last Saturday, Sri Lanka claimed the two-match series, 1-0; their first bilateral series win in ODI cricket since 2016.

Earlier in the day, after being asked to bat first, Karunaratne top scored with a fine 77 to anchor the innings, while youngsters, Avishka Fernando, and Kusal Mendis – two boys from Moratuwa, slammed 74 and 66 respectively to propel the visitors to 322.

Small boundaries, a flat pitch, and poor catching proved to be allies of Fernando and Karunaratne as they added 123 runs in 22.1 overs for the opening wicket. 21-year-old Fernando, after being given a let-off on 22 at mid-off, struck his maiden ODI half-century, whacking three sixes and five fours.

Karunaratne, making his ODI captaincy debut in his first limited-overs match since the 2015 World Cup, was dropped twice, on 13 and 36. However, he maneuvered the field excellently, especially through the on-side.

Mendis, continuing his good form from the South Africa ODI series, timed the ball exquisitely and accumulated runs at a strike rate of 117 with four boundaries and three maximums.

Thisara Perera, after being promoted to number four, was caught behind for a golden duck, while Angelo Mathews, playing his first ODI since losing the captaincy and place in the side during the 2018 Asia Cup campaign, made just 1 run. Off-spinning all-rounder Dhananjaya De Silva too failed to make a contribution with the bat as Sri Lanka slid to 258 for 6, after being 204 for 1 at one stage.

Lahiru Thirimanne, who was slated to come in at number three, walked out to bat in the 37th over and remained unscathed till the end – scoring 44 off 40 deliveries.

Jeewan Mendis, Isuru Udana, and Suranga Lakmal used the long handle towards the end to push the Sri Lankan score above 300 as they mustered 99 off their last 10 overs. The fast-bowling duo, Brad Wheal, and Safyaan Sharif shared five wickets for the hosts.

Sri Lanka will now travel to Cardiff as they prepare to play South Africa and Australia in their two official World Cup warm-up matches before they take on New Zealand in their tournament opener on 1st of June.

StandUnited – What the Cricketers had to say