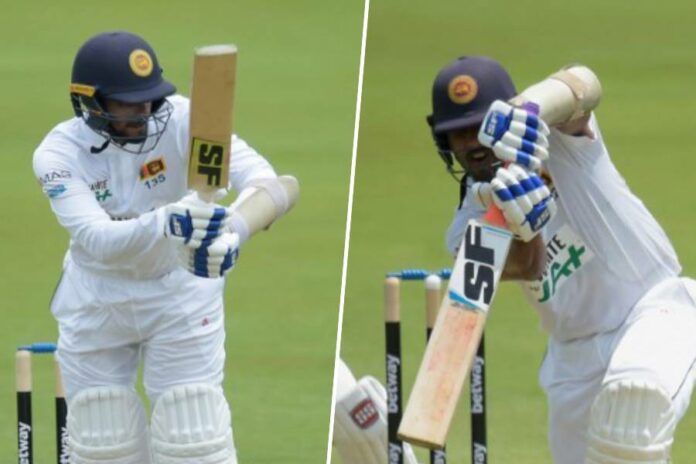 After winning the toss, Sri Lanka decided to put runs on board first on a hard surface with an even covering of grass. The wicket was so hard that it was a paradise for Anrich Nortje’s extra pace and bounce. It also required a bit of a cautious start and the first hour was predicted to be threatening to the batsmen.

The visitors had a troubled start as they lost their Skipper early in the innings, followed by two quick wickets a few overs later, sending the entire top order back to the dressing room with the board showing 54 for 3.

Kusal Mendis was clearly beaten by pace and looked all over the place right from the time Anrich Nortje, who consistently bowled at 150 kmph, came into the attack as the first change bowler. Eventually, the 25-year-old succumbed to Nortje’s pace, trying to pull him over mid-on.

Wiaan Mulder, who is making a comeback into the South African side, bowled sweetly as he kept moving the ball both ways with ease. He accounted for Kusal Perera’s dismissal in his first over as the experienced left-hander swung his bat hard at everything, eventually nicking one back to the keeper.

A depleted bowling attack of the host saw a frustrating day at work. This opportunity for Wiaan Mulder required him to play the role of a veteran. He was playing the shades of Vernon Philander as he kept moving the ball either way with ease returning figures of 3 for 68.

Dinesh Chandimal seemed to have carried through his fine form in first-class Cricket to this game. He looked calm and composed on the crease and handled Nortje’s pace pretty well. His technique seemed flawless as he struck a couple of boundaries through covers with ease, which was a sign that he was in control. The former Test Captain made a classy 85 off 161 deliveries.

Just as expected when wickets tumbled early, DDS produced another eye-catching innings as he struck a valuable 79 runs before leaving the field with a muscle injury. The right-hander was scintillating against pace and made that knock look so easy on the eye with some elegant on-drives against pace and delicate cuts against spin.

Niroshan Dickwella played a good hand scoring a useful 49 runs off 86 deliveries after walking in to replace the retired DDS.

Despite that shaky start, the Sri Lankan batsmen looked confident at the crease after a long while. DDS and Chandimal batted all the pace out of the Proteas fast bowlers and made them toil hard for wickets. If the batsmen of a team are calling ‘NO’ loud and clear, refusing running and if they are timing their on-drives with all the ease on earth, that is a sign of an in-form batting unit. That was visible in Sri Lankan batting today. They were positive throughout the day and ended each session on top. Even after losing 3 wickets, they were at 102 runs in the first session. They bettered it with 110 runs without losing any wickets in the second session and racked up 128 runs in the last session. Teams who are consistently scoring at a rate of 4.00 run per over in Test cricket, usually yield positive outcomes. That was the key to this well-architected innings of Sri Lanka.