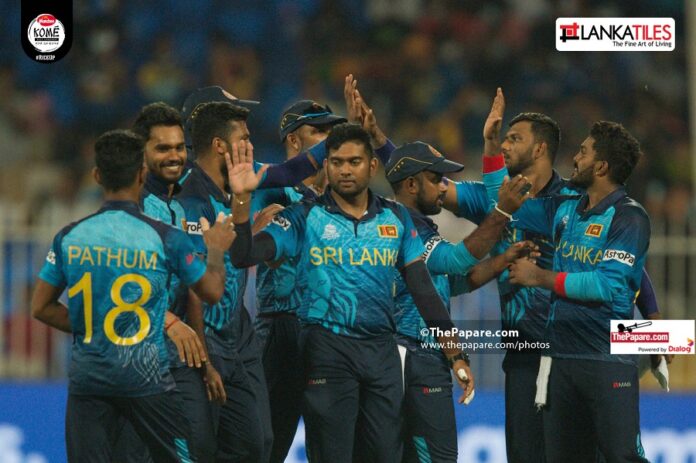 Sri Lanka crushed the hapless Netherlands outfit by 8 wickets to win their last Round 1 clash in the ICC Men’s T20 World Cup 2021 at the Sharjah Cricket Stadium on Friday.

With Sri Lanka already qualified to the Super 12 stage and the Netherlands flying back home after this game, this was anyways a dead-rubber in the context of the tournament.

Lahiru Kumara and Wanindu Hasaranga picked up 3 wickets apiece as Sri Lanka skittled out the Dutch to 44, the second-lowest team score in Men’s T20 World Cups. Sri Lanka reached the target in more than 12 overs to spare.

Earlier, Sri Lanka won the toss and elected to field. They made one change to their side from the previous two games, dropping out-of-form Dinesh Chandimal to include Charith Asalanka in the lineup.

The Netherlands got off to the worst possible start when their in-form opening batter Max O’Dowd was run-out courtesy of a direct hit from skipper Shanaka at mid-off.

The wickets fell in a heap when ‘Mystery’ spinner Maheesh Theekshana castled one-drop batter Ben Cooper and opener Stephan Myburgh in the same over. However, Theekshana left the field with a side strain soon after he bowled that over. Later on, the team management confirmed to ThePapare that he should be fine for the rest of the games.

Since then, it was a procession of wickets as Hasaranga kept on hitting the pads of the Dutch batters in front of the stumps. Hasaranga took 3 wickets all in the same fashion as the Netherland batters had no idea to read the world no.2 ranked T20 bowler.

Speedster Dushmantha Chameera bounced out Roelof Van Der Merwe as the Dutchmen were 6 down inside the powerplay while his partner-in-crime, Kumara cleaned up the tail with a stunning bowling display.

Chasing 45 runs to win, Sri Lanka lost Pathum Nissanka early while Charith Asalanka too failed to make an impression. However, Sri Lanka will be happy since Kusal Perera regained his form and made sure there were no hiccups in the chase as Sri Lanka completed 3 wins out of 3 games in Round 1.

In the previous meeting between these two nations in T20Is at the 2014 edition of the ICC Men’s T20 World Cup in Chittagong, Bangladesh. The Netherlands were bowled out for just 39, Sri Lanka chasing the target in 5 overs.

Sri Lanka tops Group A and will play in Group 1 along with West Indies, South Africa, England, Australia and Bangladesh while Namibia who stunned Ireland earlier in the day at the same venue will be playing India, Pakistan, Afghanistan, New Zealand and Scotland in Group 2.

Sri Lanka’s fixtures in the Super 12 round