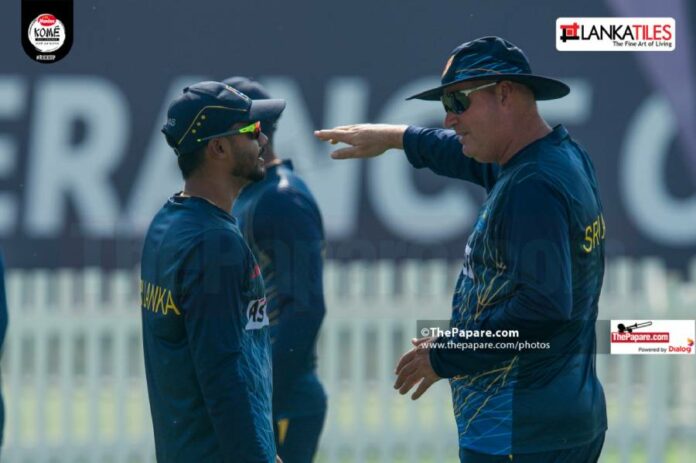 The fears of Sri Lanka getting knocked out of the ICC T20 World Cup are over and they have gone through in style.

They did with a game to spare having almost certainly topped the group even before their game against Netherlands began.

They say, well prepared is half done. Excellent planning has given them much impetus in this competition and the fans have come back believing their team is now in with a chance to reach the semis.

The arrival of former captain Mahela Jayawardene in an advisory capacity has been a godsend. He has been dealing with lot of T20 cricket in recent times and has much to offer. Everyone is glad that he accepted the role to ensure Sri Lanka qualified. As he told ThePapare in an interview, he would have loved to stay on but having been away from his family for nearly 140 days, it just was not possible. Five months is a quite a long time for someone who has a young family.

Head Coach Mickey Arthur needs to be given a lot of credit as well as he has seen through some tough times and his experience has enabled him to hold the young team together. There were a series of injuries leading up to the World Cup and then the suspension of three players who were going to form the base of his batting unit derailed Sri Lanka’s campaign. But Arthur did not give up, kept believing and put in the hard yards. The results have been tremendous.

It was a smart move to add Lahiru Kumara into the World Cup squad. It was a last minute replacement and a clever ploy. The thinking behind it was that Kumara, with his additional pace, was going to be quite a handful against teams like Ireland, Netherlands and Namibia who had not faced that type of pace often. As a result Kumara and Dushmantha Chameera blew away the oppositions.

What makes Kumara even more dangerous is that he has added a new weapon to his arsenal, delivering the yorker to deadly effect. Chameera has been consistent in the last eight months, moving the ball at a good pace and has troubled the batsmen. The duo who bowl 145 plus kmph have been well complemented by Chamika Karunaratne, who broke the 140kmph barrier earlier this week. The nation’s fast bowling department is in the good hands of WPUJC Vaas.

Ireland were going to be the biggest challenge and they did put Sri Lanka under tremendous pressure when they claimed three wickets for eight runs. The former champions were staring down the barrel at that point and then came the smart move to promote Wanindu Hasaranga. It had been decided to use Wanindu as a ‘floater’ in the batting order and he counterattacked making his career best score.

Pathum Nissanka too chipped in making his career best score as the duo shared a record fourth wicket stand of 123 runs to seal the game and ensure a big win. Nissanka too wasn’t in the original plans but Mahela felt that he had a role to play in the shortest format of the game and his form is going to be vital.

The decision to demote Avishka Fernando to number four took a few by surprise but apparently the team had done some very good analysis of a few grey areas in Avishka’s batting while opening in the T20 format and made the decision. Another contributory factor for getting him down to number four was there wasn’t much fire power in the middle order with some players who were going to form the nucleus of the team suspended. In the end, it has all worked well.

Sri Lanka have improvements to make though to challenge stronger teams. Kusal Perera is yet to make a big contribution since returning from injury and having him firing on all cylinders is vital as he is the sort of player who can take bowling attacks apart. Skipper Dasun Shanaka has come up with decent cameos but the team will be expecting much more from him.

Fielding is another area that needs to be sharpened up as there were too many dropped catches during the first two qualifying round games.

Sri Lanka will be glad that they have avoided the Asian bloc at the business end of the competition. Chances of Dasun Shanaka’s side beating teams like England, West Indies, South Africa and Australia in these conditions are better than facing the Asian bloc. It will be a tough contest no doubt but you tend to get the feeling that the team is now playing without the fear factor which is crucial.

Good times are ahead.