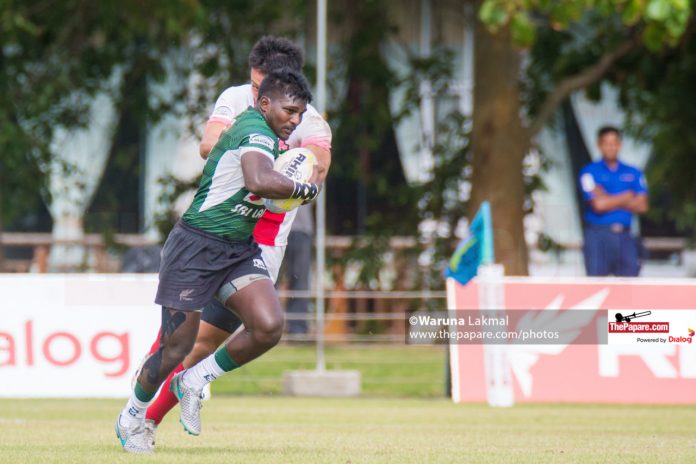 Sri Lanka managed to thump Korea in their opener of the Asia Rugby Sevens Series 2019 2nd leg encounter as the Tuskers’ convincingly beat the team that ranked 4th in the 1st leg of the series.

Right from the get-go Sri Lanka looked fiery and sharp as young Janidu Dilshan continued his good form and seemed impressive as he made an early burst and drew first-blood under the posts, giving Sri Lanka a much-needed lead.

Despite including 4 debutants in the team, the Sri Lankan men put on quite the show in the first-half defensively, especially with 6 men on the park, after Kevin Dixon was yellow carded. Although Korea managed to get over the whitewash just 2 minutes before the break, Sri Lanka managed to extend their lead and add another 7 points as Jason Dissanayake scored a stunning try after burning the Korean winger on the outside at the brink of half-time.

Though Sri Lanka missed the likes of Srinath Sooriyabandara in the team, Dixon and Sudaraka Dikkumbura filled in the vacant area quite impressively, along with Janidu Dilshan who seems to be blossoming into a try scoring machine as he scored his second of the match at the start of the second-half.

Following him, Dixon added the final nail in the coffin as team Sri Lanka convincingly beat one of the top 4 big guns in Asia, starting off their run in the 2nd leg in China with a bang.

Sri Lanka will face Chinese Taipei in their next match at 3.08pm Sri Lankan time.

Stay logged on to ThePapare.com for more updates and news.