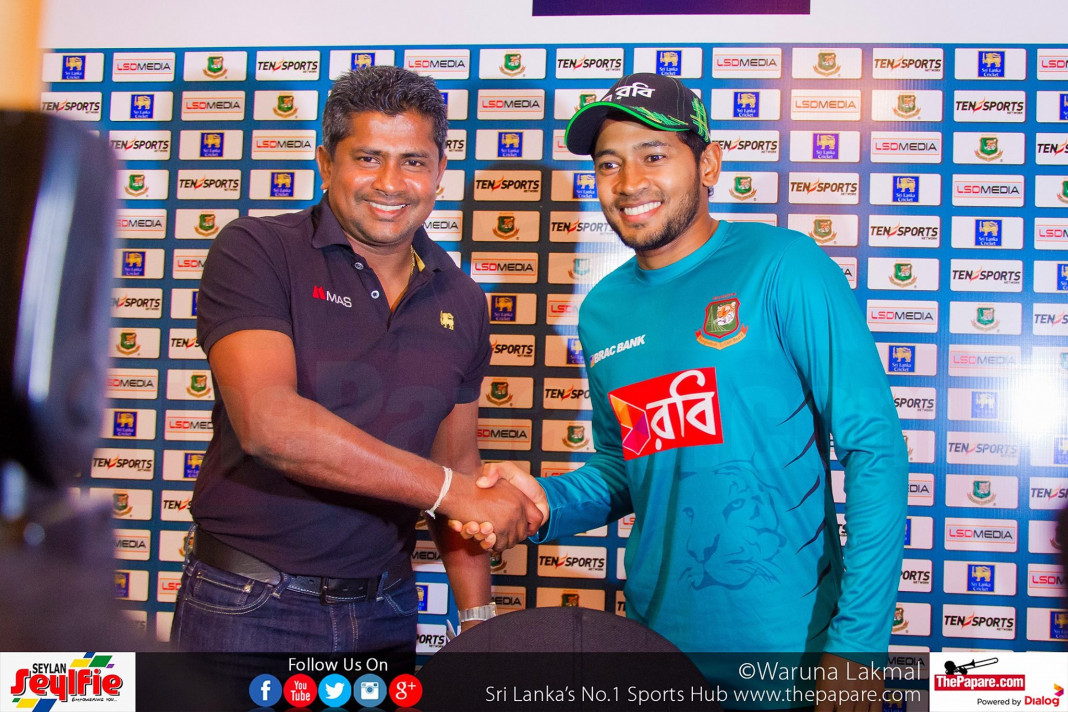 The Bangladeshis have arrived in Sri Lanka for an exciting tour which includes two Tests, three ODIs and two T20’s over a span of a month.

Sri Lanka has a formidable record at home as they defeated Australia 3-0 in the last series that they hosted in August 2016. Bangladesh by contrast have only won three of their Test matches on the road since gaining full status 17 years ago although they have shown recent signs of improvement and beat England in a home Test late last year.

The national selectors have named a 15-man squad for the 2 Test series against Bangladesh which starts on the 7th March in Galle. Rangana…

Three Sri Lankans will be rooting for Bangladesh this time around providing coaching assistance to the visitors throughout this tour. Former opening batsman Chandika Hathurusingha who is Bangladesh’s head coach has been in the forefront of Bangladesh Cricket’s recent rise while former stylish middle-order batsman Thilan Samaraweera will give services as the batting coach. The third Sri Lankan in the team management is former club cricketer Mario Villavarayan.

“I would say that the way Hathurusingha thinks about the game has helped me too. With so many Sri Lankans in their camp, they have a good idea about our team and our game. The three of them have done a remarkable job with the Bangladesh team, particularly Hathurusingha. That’s why I say that this is a challenging series for us. They have more information than other coaches have about us.” Sri Lanka skipper Rangana Herath stated about the Lankan contingent of coaches in the Bangladesh camp.

With the likes of Asela Gunarathne and Niroshan Dickwella earning recalls to the Test team, Rangana Herath who has taken 25 wickets at a bowling average of 25.60 in six Tests against Bangladesh will definitely groom his apprentice, a fellow uncapped left-arm spinner in Malinda Pushpakumara.

“He has all the experiences he needs to compete in this level because he has taken over 500 first-class wickets. It will be tough to fit him in the playing XI because as the Captain, even I’m an orthodox left-arm spinner but if the situation arises, we might go in with an extra left-arm spinner.” Herath stated at the official tour press conference.

The last series between the two sides in Sri Lanka in 2014 saw the hosts win one of the Tests by 248 runs while the second was a draw. From the 16 Test matches played so far between these two subcontinent sides, Sri Lanka has won 14 matches while the other two have ended as drawn encounters.

“Sri Lanka played a great series against Australia recently, whitewashed the number one Test team at home. Yes, we are a bit inexperienced but we will try to match up with them and try our level best to beat Sri Lanka. We will try to play competitive cricket in all five days and hopefully then the results will come in our way.” Bangladesh skipper Mushfiqur Rahim said.

Bangladesh will play their 100th Test match at P. Sara Oval from 15th March to 19th March. The Tigers made their Test debut in November 2000. They will be the last of the current Test nations to complete the century, having taken little over 16 years to the mark.

“It’s a good opportunity for Bangladesh to show the world how far they have come in Cricket. Coming back to Sri Lanka has always been great but in terms of cricket, we are preparing like any other team. What we are looking to do is play to our potential all the time. They (Sri Lanka) are a very good team at home, so we cannot take them lightly, we prepare the best we can.” Hathurusingha said.

The one-time shadow coach of the Sri Lanka team, Hathurusingha was sacked by then Sri Lanka Cricket administration under DS de Silva as he had not obeyed orders from SLC chairman DS de Silva, in a telephone conversation, to not abandon the team and return home ahead of the one-day tri-series final in Harare, where Sri Lanka was scheduled to take on Zimbabwe.

“I have moved on from that incident. It is disappointing that I couldn’t contribute to Sri Lanka Cricket but that’s the way of life. I’m very happy with what I’m doing now.” Hathurusinghe further mentioned.